The shifts in the price of renewable energy can be assessed through analyzing increases in government subsidies to the industry and the increase in consumer demand. Subsidies were put in place to promote the growth of renewable energy firms. These subsidies allowed firms to become established in an industry in which the fixed costs are significant and success requires large economies of scale. As firms achieved larger economies of scale, the cost of producing forms of renewable energy technology became cheaper, while technology efficiency and quality improved. Subsidies shifted the supply curve rightward, and greatly reduced the price. This reduction in price led to an increase in demand as renewable energy became more affordable for consumers. Additionally, environmental conservation awareness may justify the increase in consumer demand for renewable energy over the past fifty years. Although this 1.3% increase in demand from 2010 to 2013 shifted the demand curve rightward, the resulting increase in price was offset by the large government subsidies shifting the supply curve rightward. The overall effect was a lower price for consumers as suppliers were encouraged to increase their output. 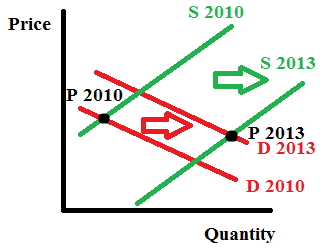 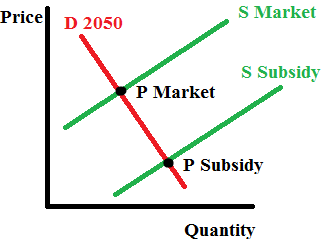 EIA Report: Subsidies Continue to Roll In For Wind and Solar – IER. (2015). Institute for Energy

clean and renewable wind, water, and sunlight (WWS) all-sector energy roadmaps for the