Samsung Electronics is one of the Korea’s top electronics company which was founded in 1938. It has grown from small business to be one of top leading electronics and Technology in the world. It makes many kinds of consumer devices, including DVD players, digital TVs, and digital still cameras; computers, color monitors, LCD panels, and printers; semiconductors such as DRAMs, static RAMs, flash memory, and display drivers; and communications devices ranging from wireless handsets and smartphones to networking gear. However, they are mostly popular for their Smartphones (Galaxy), which is considered as one of its mains products. Samsung Galaxy includes categories such as Galaxy Note series, Galaxy Tab Series and Galaxy S series.

Samsung from several years are relaying mostly on its smartphones sale to maximizing its profit, as other products sales are showing decline such examples include home appliances and LCD TV. Unfortunately, currently Samsung are struggling to sustain their sales and profit from Galaxy smartphones. Samsung profits have been on declining demand since 2013. Despite the company being the greatest in the world when it comes to production of smart phones, the pressure that it continues to receive from the market can no longer be denied.

In this year second quarter Samsung Galaxy smartphones have shown even huge profit and demand drop for its smartphones. As you can see below the chart clearly shows the Samsung profit have been going down from year 2013 and was worst in the second quarter of this year. 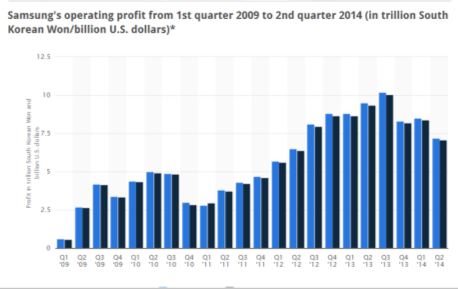 There are various reasons for this downfall, Samsung has always used a huge marketing budget. Nevertheless, in the last quarter, its budget was far larger in ways that were not favored by the company. The company has been compelled to use huge amounts of money on promoting the older and lower-end gadgets that have been congesting its warehouses because of “weak demand” . This fall in trade, together with the extra money spent on publicity has catalyzed the firm’s dwindling fortunes. Actually having, fewer shipments of high end phones, has also resulted in having and investing to market the old models has helped demand decreasing for Samsung’s. More importantly the market competition that Samsung is facing from its main rival Apple IPhone smartphones and other competitors has also contributed in weakening the demand.

Decline in demand also can be attributed to their exorbitant price of smart phones. Because the Price elasticity of demand for Samsung is high, increased prices has result in less demand for its smartphones. Also, Samsung’s competitors, which are mostly based in china, are producing phones that have features that are essentially similar to those of Samsung. They are however, offering these phones at prices that are much cheaper and affordable. This has, therefore, beat the purpose of purchasing Samsung phones that are unnecessarily expensive and shifted people demand from its smartphones to their rivals’ cheaper smartphones.

The decline of the sale and the demand of smart phones is caused by inability of Samsung to be more creative. For example, when it comes to the features that are contained in their many smart phones. Their S series smart phones are the typical. The cheaper ones have fewer features though. The difference in the ones that are more expensive is their size. Since the release of the S3, the subsequent ones S4 and the recently released S5 are similar in several ways. Consumers are starting to feel that these S phones are overrated and over advertised, which coincidentally has been said of the reasons Samsung is investing a lot in over advertising.

This strategy is geared towards trying to get their products out of the warehouses and into the market to be purchased by the consumers. Unfortunately, this have resulted not only in having a negative impact on the sales, it’s also reduced their profit margin due to overspending and less demand.

As an economic consultant observing Samsung Galaxy smartphone declining demand, I will try to recommend solutions to fix this economic problem by analyzing the root reasons.

Searching and analyzing the market it was found out that there was a lot of factors that influenced Samsung smartphone sales which made it gone down in the third quarter of the year. First of all consumer taste and preference for better improved technology products. The fact of the new technology, and the willing to adapt new features and devises that made Samsung to be the second choice of its customers.

In addition to that, the strong rival competition and all consumers being aware that there are other substitute smartphones that have similar even better featured, such as the IPhone, which gives negative impact on demand. For example, when Apple IPhone 6 has launched in the market, it has made major shift in demand from Galaxy to IPhone smartphones.

How Samsung’s Demand could be increased

In order for Samsung to recover from its decreasing demand, it should do several things such as offering prices that are competitive in the international market. Whereas the number of clients obtaining smartphones is still raising, it is growing harder for the company to tap new market for its high-end devices. This therefore suggests that the firm will have to minimize its prices in order to sell these gadgets. However, this will still reduce its profit margins.

Samsung should focus its attention on shifting its product mix towards low and middle iced handsets. Under the prevailing situations, the company will have to wait and observe how it will uphold its profitability in the future. Additionally, Samsung needs to rollout new products that will stave off gains made by Apple on the larger-screen iPhones; especialty the Galaxy developer has dominated (Sakr, 2014).

Alternatively, if Samsung was not able to compete in market against it rival IPhone and will give up to invest any more in Smartphone. We highly recommend that it should invest more in developing and improving its tablets as it score to have a higher demand than the smart phones.

Obviously by improving Samsung Smartphones quality and increasing its decreased demand, will help in raising the reduced turnover for its third quarter. Samsung makes about two third of its profit from its smartphones sales. Which means any drop in smartphones sales will have a huge impact on the company’s turnover. If Samsung was able cope with shifting market preferences that will help them stand out among competitors like Apple.

Samsung deals mainly with Technology which is one of fast moving and updating things and to survive in the market, Samsung should be always ready to offer fast new technology features in their Smartphones. It mainly include keeping an eye on it main competitor “Apple IPhone” and try to offer features that are unique or at least which are offered by Apple IPhone to be able to compete in the market. This idea has been successful with IPhone when they have took over Samsung’s advantage of having big size screens which was one of reasons of people smartphone shifting demand to Samsung. IPhone has been successful to offer that feature in its IPhone 6 Plus by which it attacked Samsung’s main unique feature over IPhone.