Section II: Role of Government in promotion of Innovation

The innovation system in India has been predominantly grown under the umbrella of state support and leadership. The state has been both the creator and promoter of innovation in the country, gradually broadening and deepening their support for innovation in the private sector and to the economy as a whole. This fact is further corroborated when the surfeit of legal, tax and fiscal considerations provided along with the numerous government run institutions and policies are taken into consideration. Infact, in the last few years the Indian government has been on a policy splurge and has churned several policy documents to promote innovation in the country. These policy measures articulated in the form of Science, Technology and Innovation policy of 2013 which visions positioning India among the top five global scientific powers by 2020 and also aims at increasing the Gross expenditure on Research and Development (GERD) to 2% of GDP in the next five years (Ministry of Science and Technology, 2013). This section provides the necessary backdrop to place the current innovation ecosystem within the Indian context and also elucidates efforts made by the government towards the promotion of innovation in the country.

In order to analyze the various manifestations of state intervention to promote innovative activities in the country we divide the policy instruments into two broad categories: i) Financial instruments which include instruments like R&D tax incentives, Research Grants and Loans, and ii) Non-financial instruments which include supply of human resource in science and engineering, industrial standards and clustering. We would first be discussing the evolution of the tax policy with respect to R&D followed by the research grants or loan schemes in the country. Then we would be discussing about the supply of manpower for developing the research capacity of the country followed by a discussion on the policies for promoting innovations by firms.

The R&D activities are mostly carried out in the form of in-house or intramural R&D. The private sector tends to underinvest in R&D primarily due to its public good nature and also the problem of appropriability associated with it. Hence, it becomes essential for the state to intervene and ensure that such market coordination failures are resolved. Majority of the governments across the globe provide subsidies to the private sector to encourage domestic enterprises to commit more resources to R&D. As shown by (Mani, 2010(a)) the R&D tax incentives in India has evolved over time (Table I)

Table I: Evolution of the policy on R&D tax incentives in India 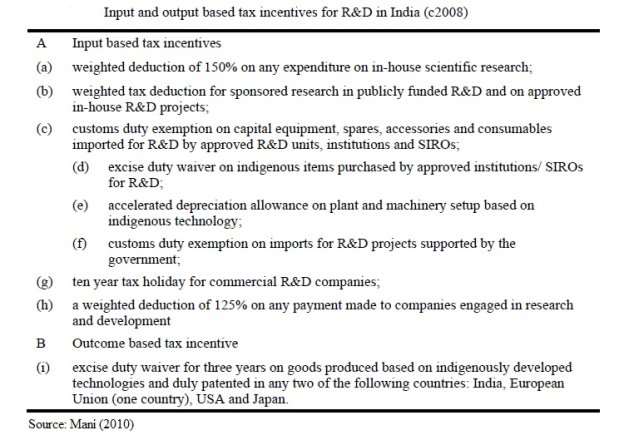 Figure 1: Generosity of tax regimes with respect to R&D 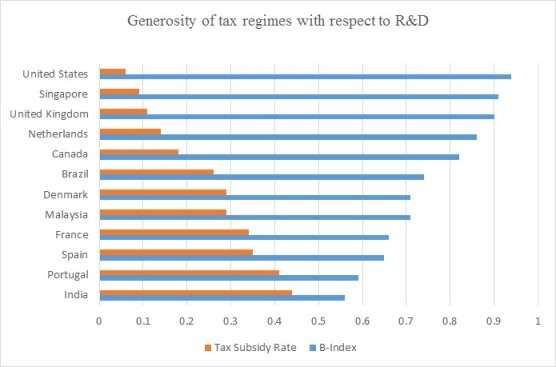 Effectiveness of the generous tax regime

In section I we have already shown the gradual increase in the contribution of BERD to the total R&D expenditure in the country. One of the main reasons for the same is the tax generosity that is present in India with respect to R&D expenditure. However, an alarming aspect of the same is that this surge in R&D expenditure is extremely concentrated within few industries like pharmaceuticals, IT and automotives. This trend is indicative of the fact that R&D culture is not spreading across industries rather getting concentrated amongst few. Also, another fact which has been highlighted earlier in section I is the growth of the foreign companies in R&D performance and their increasing tendency to claim patents based on this research both in India and abroad. In other words, these foreign companies are utilizing the favorable fiscal regime of our country but trends also suggest that they are rather quick to claim the relevant IPR over their inventions made in our country. In fact, (Mani, 2014) has argues that “with tighter TRIPS compliant IPR regime put in place by India, from 2005 onwards, the possibility of spill-overs to the domestic economy from the R&D done by these foreign companies stands greatly diminished”.

In order to access the effectiveness of the tax incentives that is to measure whether the tax forgone by the state is actually leading to increase in investments in R&D, (Mani, 2010) concluded that “the pharmaceutical industry has been a target of most of the financial incentives. There is thus a fine targeting of innovation financing in India. We endeavored to estimate the coefficient of elasticity of R&D with respect to tax foregone as result of this incentive scheme. The resulting exercise showed that R&D expenditure of the concerned industries was inelastic. We also found that the incentives did not form a significant portion of R&D. It is therefore not prudent to make any comments on the effectiveness of R&D tax incentives. But we see that the size of the firm does appear to be an important determinant of R&D, at least, in the case of some of the industries. Allowing firms to become larger and through that process of growth enabling them to become larger investors in R&D may be a better policy than providing them directly with subsidies. It is also that the total number of firms enjoying these incentives is not too many. It remains to be seen whether this is due to any bureaucratic delays or difficulties in the actual administration of this incentive”. Hence, the core issue is the reach of the benefits of the liberal R&D tax regime in India is rather limited to few industries. Therefore, government must come out with policies to spread its reach across various sectors in the country. (Add more on agricultural sector and increase in other sectors R&D exp)

Section I: Why is government intervention a necessity?

In this section we look to debate upon why state intervention is necessary for the innovation system in India to exist coherently. This section argues that the role of state is way beyond what is generally perceived to be in any innovation system .i.e. to ensure a steady macroeconomic structure and infrastructure that is conducive to private sector activity. The state has to be much more proactive, it has to act as a leading agent, fund for the most uncertain aspects of the research which the private sector is too risk-averse to participate. It has to set a building ground around a high growth area before the actual potential is understood by the private sector. If it is in “the public interest for innovation to occur, there is a role for the public sector to require it to happen, rather than sitting back and hoping it will happen of its own accord provided the conditions are right” (Mazzucato, 2011). The increased participation of the private sector innovation system in India; with their increased share in GERD in the economy, their splurge in taking out patents, is a positive aspect but it doesn’t correlate to the fact that the state’s role should diminish. Instead, both must be seen as complementary agents that will co-exist coherently.

The primary rationale for the role of state in innovation stems from the public good characteristics of knowledge. Since it is both non-rivalrous and non-excludable we see a under investment in knowledge production. The creator of knowledge fails to appropriate the full returns from her own research the problem of appropriability comes into picture. In the literature the rationale for state intervention is inherent in the existence of multiple equilibria, more specifically “poverty trap” equilibria. It has its precedents in the “theory of big push” by (Rosenstein-Rodan, 1943) which highlights the fact whenever an individual firm makes an investment, the tickle down effect is seen on other firms as it increases its consumption of other goods. When this phenomenon is aggregated across the economy with all firms undertaking technological development, in totality the aggregate demand for each product increases making investment decisions self-reinforcing. The problem of market failure arises when firms fail to coordinate their investment decisions and under-investment by one leads to under-investment by all. It is then for the government to coordinate the investment decisions across firms to ensure the economy moves towards favorable equilibrium. In practice, the state’s role might include synchronization of private sector investment decisions, providing taxes or subsidies to affect the market prices and creating public sector units with a parallel involvement of the private sector.