and do not necessarily reflect the views of UK Essays.

What is Architecture ? The definition of Architecture is the art or practice of designing and constructing buildings. Architects are the one who runs the world. They create an enjoyment story in every building that they design so that the world would not be as boring as it is. When it comes to architecture world it is super wide and it consist of many different styles and techniques. Every country have their own styles of designing to express their country ‘s uniqueness. One of the best design in the world is the building that meet the need and pretty much response to the climate. Also. It needs to know about the microclimates and the climate zone. know the basic physiology of human thermal comfort. reduce the loads and enhance visual comfort by controlling the sun. Thermal mass are used to improved the comfort efficiency and to pick a space-conditioning strategies that are climatic responsive. Vernacular architecture is one of the architecture style that take seriously on all of this criteria when designing a building. Vernacular Architecture is being refer as a traditional buildings that are designed to meet the local climate and culture. They design with using a deep understanding together with a respect towards the nature. Vernacular architecture can be called as a sustainable architecture as well since it are also built to sustain the environment without destroying it. Vernacular architecture tends to evolve time after time to reflect the technological. reflect the historical context in which it exist. reflect the cultural and also reflect the environment. This style of architecture used the local resources and available energy and materials. so it can refer accordingly to the climate. site and culture. The most common basic function in vernacular architecture is to shield and protect from the weather conditions.

Passive cooling system can not be separate from the vernacular architecture as they are greatly related together. Passive cooling is a building design approach that targets on the heat gain control and heat dissipation in a building in order to improve the indoor thermal comfort with lower or zero energy usage. A good orientation of a building. proper design layout and system used in a building will allow the passive ventilation system be in the building. Ventilation is the main criteria in passive cooling system as it is the one that move the air from outside building to the inside so that it can improve the thermal comfort of a building. And my case study is to compare the passive ventilation of Modern Malay House in Belum Rainforest Resort , Perak with a common Traditional Malay House in Malaysia.

2.0 – An Overview of the Modern Malay House in Belum Rainforest Resort. Perak. Malaysia

This make the place a great become as a great place for the passive cooling design. 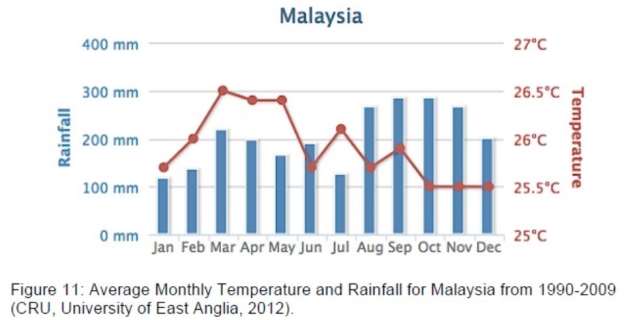 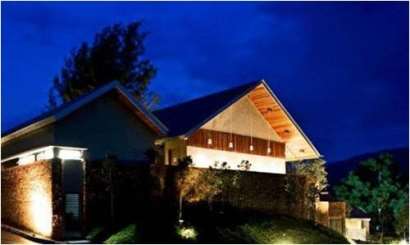 The similarity of this modern malay house with the traditional malay house in Malaysia is they used completely 100 per cent wood as the main material for construction.

3.0– What are the Comparison of Passive Ventilation on the Modern Malay House in Belum Rainforest Resort with Common Traditional Malay House in Malaysia ?

A traditional Malay House produce the ventilation by applying many of full length windows and doors at the body level. ( Yuan, 1987: 76 ). Hassan and Ramli ( 2010 ) conclude that Huge openings on Malay house walls produce high air intakes outside to lowering the performance of stack effect. The below diagram stated clearly that. most of the outdoor and indoor temperatures were higher than 28 degree Celcius with the humidity level in the house is higher than 60 per cent and the wind speed in Malay house flow in about 0.3 m / s to 3.4 m / s. 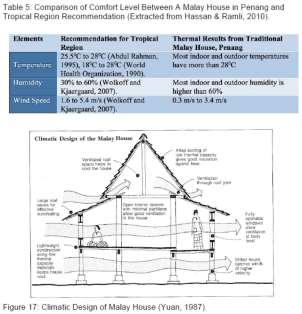 There are several comparison that can be found in Modern Malay House in Belum Rainforest Resort. The Modern Malay House in Belum were design using a timber construction. Most of the timber construction are not solid if to compare to a concrete construction due to being build piece by piece. Since it is build piece by piece so it will have a small gaps between a piece and a piece of wood. This small gaps is one of the strategy in passive cooling system. The function of the small gaps is to allow the movement of air into the house so that it could ventilate and automatically improve the indoor environmental quality. Most of the traditional malay house have this thing but if to compare to the modern side of malay house in Belum Rainforest Resort. it does not have this thing. It does not have small gaps on the wall and floor. the small gaps only can be seen on the outside of the house which is on the balcony’s floor. This is not good since it blocks the air from entering into the house. The unique thing about the Malay house is that it is built on stilts. This approach in many ways has several benefits from a thermal, functional and safety point of view. The raised floor, which is built higher than the ground, can catch winds of a higher velocity ( Yuan. 1987 : 71 ). and the use of timber planks for the floor, which have gaps between them, can bring the air into the inner space. 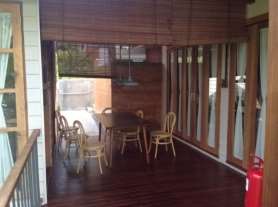 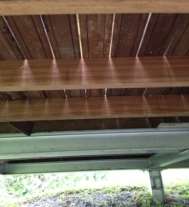 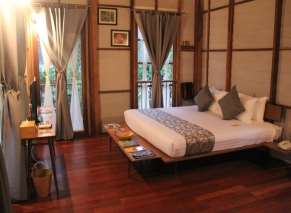 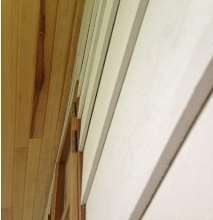 The inner side of the building which does not contain any floor gaps and wall gaps.

Other than that. during my site observation I found that there is no ventilation through roof joint that can be found in the house. This ventilation through roof joint also contribute in Passive Cooling Design. It makes the house produce a large movement of air into the building through the roof joint. Traditional Malay House really focus on the opening so that they can have a good thermal comfort without producing energy that we do not need such as electricity. Also. without opening through the roof joint the stack ventilation system will obviously not happen. 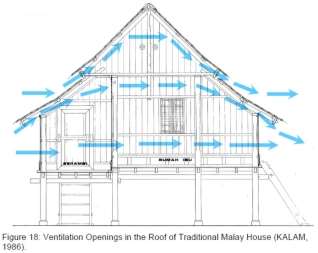 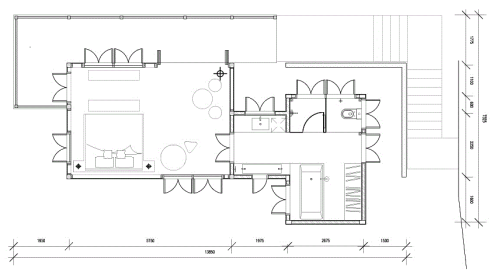 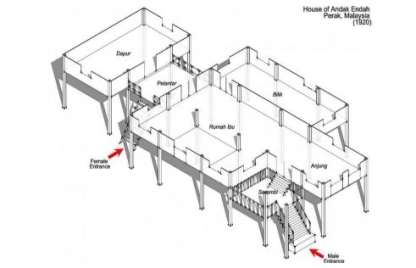 Both Modern Malay House and Traditional Malay House are randomly arranged. This is to ensure that the wind velocity in the houses in the latter path of the wind will not substantially being reduced. Stack ventilation is the flow of air from outside which enter into the building and goes out from the upper side of a the building. Stack ventilation use different temperature to move the air. Hot air increases due to the lower pressure occur. It is sometimes being called as a buoyancy ventilation. The below diagram shows how the stack ventilation basically works. 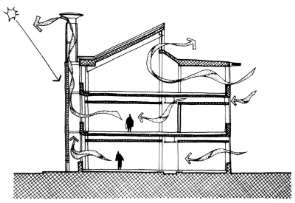 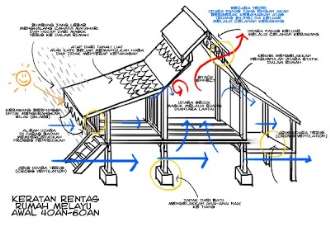 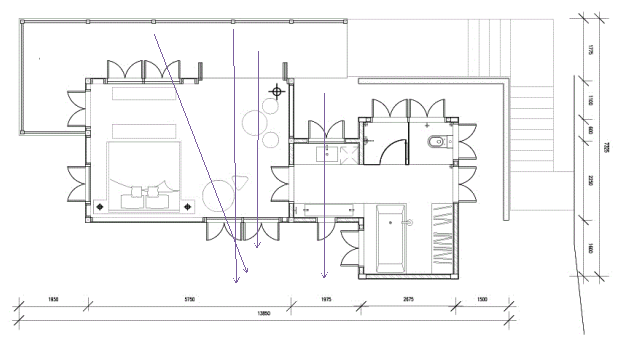 The arrows on the diagram above shows the air movement that flows into the house.

Other than that ,the unplanned arrangement of the Traditional Malay House is really important as it gives contribution in reducing the risk of the strong winds. ( Hanafi. 1994 ). Settlements that are along the coastal areas experience great wind speed than the inland religions. ( Hanafi. 1994 ) Traditional Malay House are usually detached and it dispersed the units with ample external space. This is to allow the fresh air circulation occurs in the building. (Hanafi. 1994 ). 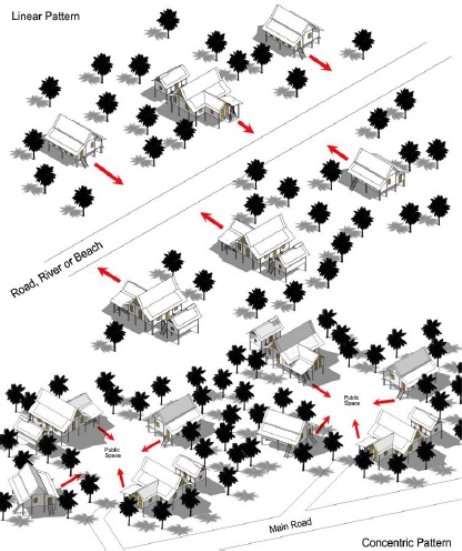 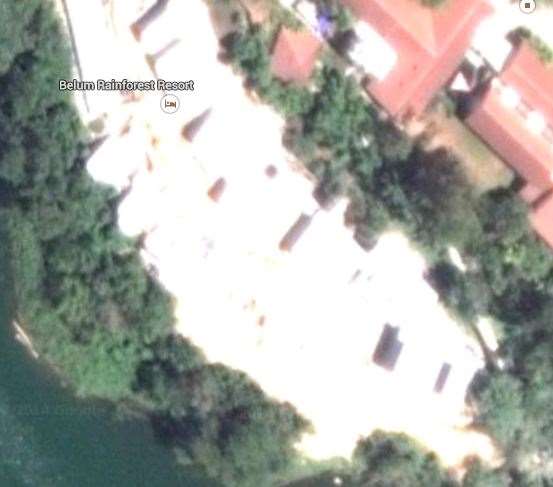 Building orientation are really important in malay traditional house. For religious reasons. most traditional Malay houses are oriented to face Mecca(east – west direction) , which indirectly minimizes the area of exposed walls to direct solar radiation during theday (Yuan. 2011). The building orientation also does help in providing good sun shading. and also a good ventilation system. Normally. the Malay Kampong House will be orientate according to the east – west orientation. This orientation function as letting you to harness the daylight and take control of the glare along the long façade of the building. It will reduce the glare from the setting sun or even from the rising sun. One more reason on why east – west orientation is the best orientation is because of it ensures the building to get a better thermal comfort. The photo below show that the not so accurate wind diagram that being taken from the windfinder.com. 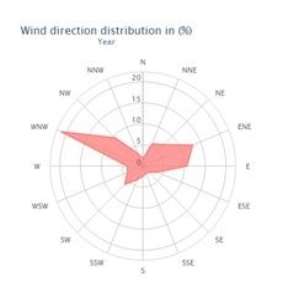 Building that are surrounded by the water element are good for passive cooling design. What I found is Belum Rainforest Resort is surrounded by a big lake which is the Tasik Banding . This Tasik banding contribute pretty well in making the house cooler and achieve the correct standard of thermal comfort. The wind which flow from the Northwest side brings the cool air from the lake and directly enter the building.

In a nutshell. Malaysia is a country that are meant to be as a hot climate country with a high humidity level. Houses in Malaysia that will be design or already been designed by people need to follow the Malaysia ‘ s climate to achieve a good thermal comfort. Modern Malay House in Belum Rainforest Resort are lack of the original features that suppose to have in every Traditional Malay House. People that design the malay house in Belum are not concentrating on the features anymore. in fact they are more in terms of creating a new building with using a different way to achieve the thermal comfort. The house might look like a malay traditional house when you look it from the farthest distance. but it is totally different when you come closer and study about the details of the house. Modern Malay House in Belum are lack in terms of passive ventilation contribution. The house pretty much does not apply the basic elements of a traditional malay house which is to have the wall gaps and small gaps between the timber for the air to move into the building. This is such a waste since this small features is actually really make the building to achieve a very good environmental indoor quality. The ventilation through the roof joint also is a good thing when it comes to express the stack ventilation system. Since traditional malay house don’t use the electricity more often than a normal building. this stack ventilation really works in every traditional malay house because it reduce the energy consumption and automatically reduce the living cost. Also. stack ventilation makes the traditional malay house to get a maximum ventilation from almost every side of the house which the wind are basically come from the bottom. middle and even from the upper side of the house. Other than that. the layout arrangement in malay house will contribute in making the place become more comfortable. Layout arrangement is one of the criteria in vernacular architecture. this layout arrangement will contribute on the flow of the wind. Last but not least it is important as well to orientate the building in a proper direction. The proper building orientation will make the building to receive a good sun shading device. better air ventilation system so that the building would not be hotter on the inside.