TMA 3 – DD209 Norbert Lukacsi P.I. B3584727 Describe, including a Phillips curve diagram, how and why the output gap between equilibrium and actual output is used by policymakers to target inflation. With reference to the output gap and the extract from Minutes of the Monetary Policy Committee shown below, explain the Bank of England’s October 2012 decision to hold interest rates constant at 0.5% and maintain quantitative easing (referred to as asset purchases in the extract).

The output gap can be defined as the difference between the actual level of production and the potential output of an economy. The output gap is closely related to targeting inflation. Along with measuring the output gap of an economy, policy makers are also interested in the measure of the growth rate of the economy’s potential output. The variable is one of the major factors for improving living standards. It is also important for conducting monetary policy as it evolves. An example would be the potential growth of the output in the economy as it can directly affect the aggregate demand and inflation. It has the influence on Income expectations and asset prices. The output gap of course is interlinked with the Labour market and its influence over inflation, as well as the general overall productivity (output) and wages. Therefore, the following essay will focus on the output gap between equilibrium and actual output used by policymakers to target inflation. It will reference the monetary policy meeting of the Bank of England in October 2012. One of the main factors which have direct influence over inflation is the Labour market. The Labour markets can control the level of output for an economy. The Labour market is generally thought of where buyers and sellers exchange goods or services, normally in the form of wages in return for labour (Howells and Santos, p.289). This would be between an employer and a worker.

Wages of course play a key role in the productivity (output) and aggregate demand for goods and services within an economy. It determines the purchasing power of the worker for various goods and services. This all has a sound effect on overall household spending. Wages can be categorised into two, as nominal wages and real wages. Nominal wage is the actual money earned in employment while real wages are the amount which can be spent on goods and services. It is the real wages which seem to have a sound effect on purchasing power and inflation (Howells and Santos, p.290).

As discussed in the monetary policy meeting in 2012, since 2008, household spending has fallen relative to the income, meaning, that the savings ratings have risen in the early 2000’s. According to Howells and Santos, there has been a particular decline in real wages since 2008, as well as the inflation rate between 2008 and 2010, which was larger than the percentage increase in nominal wages. This of course means that consumers are spending less in shops and buying less property, hence the reason why the Bank of England needs to keep its interest rates at 0.5%. These interest rates also influence the current housing boom in the UK (and particularly the South East of England) which could burst if interest rates rise in the short term as many will struggle to afford huge mortgages taken out at the 0.5% rates. Also, people in general would have less money to spend on services and goods, many companies have decided to step back from investing due to the uncertainty of the demand outlook as described in the monetary policy committee meeting. Unemployment also plays a key role in targeting and maintaining inflation, as the two are not a separate problem. It is detrimental that an economy has high rate of employment, as it can match the supply side relative to the aggregate demand for goods and services. In the case of unemployment, the economy adjusts its price levels according to changes in inflation (Howells and Santos, p.290).

Unemployment affects the output of an economy and inflation is most likely to creep in when the supply side has insufficient capacity to match the aggregate demand. As the monetary committee meeting suggested, the second quarter of 2012 had a strong import growth but a weak export growth. This can of course be not only related to a lower sterling, but a low consumption which had grown little in the end of 2011 and early 2012. Low consumption from the general public means that there is less required of output of goods and services, leading to higher unemployment as firms do not need the man power for production. Output depends on the total employment of workers rather than the actual employment rate (Howells and Santos, p.296). Output as discussed earlier has direct relation to inflation targeting, and Labour of course is just one aspect which influences inflation. The actual productivity which equates to the output has an equal bearing on the supply of goods and services. The supply side of the economy is assumed to react by matching the increase in demand which in turn increases the equilibrium level of output (Howells and Santos, p.281). As discussed in the Monetary policy meeting, the economic growth rate among many of the major and emerging economies remained relatively slow, as did the overall trade. This of course has negative aspects to the growth of the output on the UK economy. As demand does not increase supply /production, it means that the level of output does not increase beyond the equilibrium level. This also means that the output level on price inflation and wages inflation are constant (Howells and Santos, p.314). Further wage rises cannot be negotiated by workers and trade unions. Real wages would remain the same, meaning, less can be spent on goods and services. If inflation and output remain steady, then the workers and firms seem to be the content with the level of real wages (Howells and Santos, p.315). The monetary committee discussed that the inflation rate was just above the 2% that was being targeted. It would mean that wage increases could not be negotiated as output in certain sectors had actually diminished. According to the findings by JP Morgan, it had actually suggested growth in the output of the economy while new orders had risen. This would of course have a negative demand shock on the economy. The bank of England would have to further reduce the base rate of interest from 0.5%. This would not be possible as the rate is already close to the Zero Lower bound. 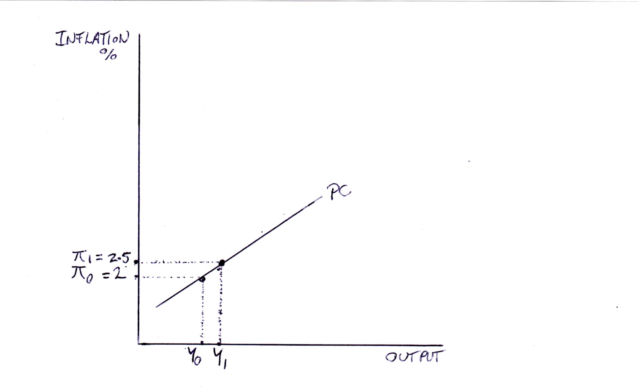 The lack of demand in the economy as mentioned earlier, has already led some companies and foreign investors from stepping away in investing. This is of course due to the uncertainty of the demand in goods and services. The Phillips curve diagram will demonstrate the changes in the economy according to the findings in the output by JP Morgan and the slight increase in inflation (little above 2% possibly around 2.5%, although the monetary minutes do not say for certain) by the Bank of England:

When targeting inflation, it is important for the government to intervene to control the level of inflation. Workers often tend to make claims in real wage rises which often the actual economy cannot possibly support the demand. This in turn pushes up the inflation and beyond the expected 2% targeted by the Bank of England. Some of the tools which are available to control inflation and increase the demands for output would be through quantitative easing (monetary policy). This is what the Bank of England were hoping to achieve by keeping the interest rates at 0.5% as described earlier, this hopes to increase investment which in turn would create jobs in the private sector and decrease unemployment. This would also increase demand for goods and services as there are more people in work who are able to spend. The overall productivity of the economy would also improve due to the increased demand. The level of output also grows, prices slow down and real wages may also increase (Santos, p.428). The Bank of England had also decided to keep the asset purchases at a level of £375billion. Using the central bank reserves it is able to inject more money directly into the economy by buying up government gilts. This will boost demand desperately needed by the UK economy. The conventional policy instrument is the base rate; this does not allow the policymakers to directly control the quantity of money (Howells, p.396). This instrument relies on investment, exports and imports and of course productivity (output). When the Bank of England had decided to adopt purchasing of assets it needs to make sure that the credibility of the policymaker and their intentions are believed by the agents. Agents will more likely believe the overall intentions of the economy if they are not being interfered by outside sources. This of course has implications when it comes to investment into the economy from abroad and from within local firms. Investment in turn also helps to boost the productivity (output) into the economy. Nevertheless, the Bank of England must sustain a positive output gap to boost aggregate demand and investment from abroad. This is quite crucial as the exports have been weak while imports have been strong. Strong imports will hinder the prospects of economic growth as the supply for local services and goods will dwindle. It will also hinder exports, as the local markets are not producing enough services and goods which could be sold in markets abroad. If the Bank of England focuses on strong demand, it could lead productivity (output) to recover sharply. This is especially so in sectors where the productivity (output) has softened in the last few months. It is also crucial for the actual output (through labour productivity) to move beyond the equilibrium level, as the UK economy will be able to produce more goods and services with the same resources. 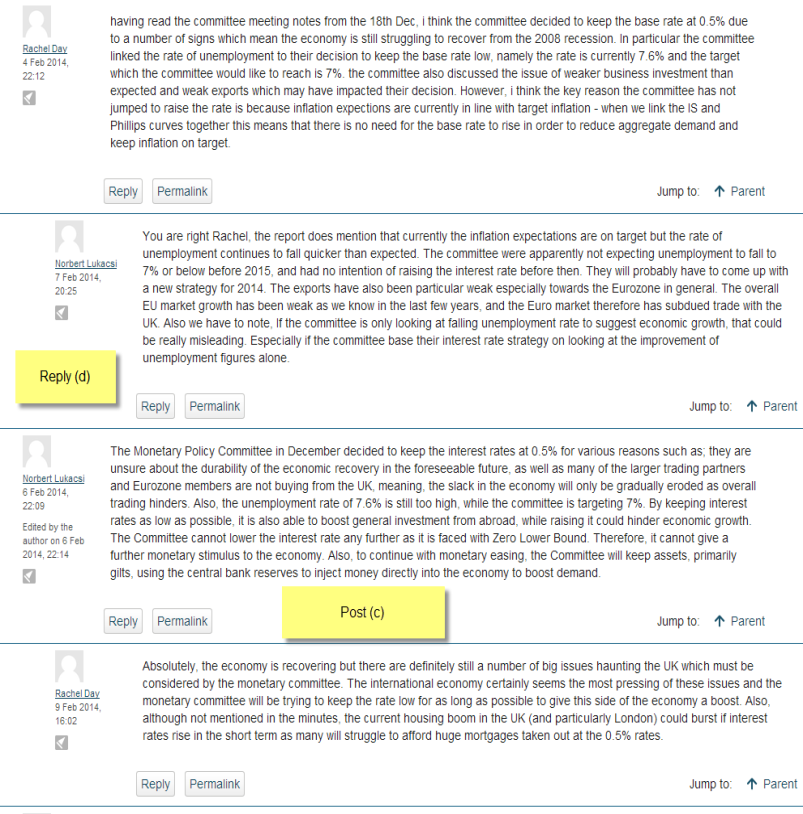 Reflection on discussion: The discussion has underlined my initial analysis and understanding of the meeting and content of the monetary policy committee minutes. My discussion and Rachel’s, shared similar understanding, while she also pointed out that inflation expectations were on target. My focus in the posting was on the uncertain durability of the economy and boosting the investment from abroad for the reason why the interest rate stayed the same, as well as the lack of trading hindering economic growth.

Rachel’s analysis was more focused on the inflation rate which is closely linked with unemployment and wages. The overall discussion (posting and replying) had reinforced my view on why the Monetary Policy Committee made the decision they did to keep the interest rates the same, as well as why they decided to maintain stocks worth £375 billion.