The Internet’s development has fundamentally affected the architecture of informatics management systems, causing substantial changes in the way that this category of solutions is distributed and reached. This considering, one could say that gaining access to economical applications through a simple Web browser came as a necessity in a world that is characterized by dynamism and by the globalization of economical phenomena [Aamodt, 1996]. So, in the 90s, the main trend in application development was offering support and accessibility – for computers that had an internet connection – to a wide range of informational resources (databases and more) and applications. The testimony for this is the multitude of languages and technologies that allow the easy development of database exploitation applications through a simple Web browser. This is why scripting languages that run on servers (ASP and its follower ASP.Net; PHP; JSP etc.), are now mature technologies, that offer the possibility of developing complex Web technologies. This technologies’ existence has caused changes in informational necessities and in the equipments users need. Nowadays internet connections are available not only to computers, but also to a multitude of equipment such as mobile phones and other hand-held devices. Considering these necessities, creating a universal language became a dire need [McAfee,2005]. XML is the answer to these requests, and is a new stage in the informational age, easing the data exchange between different equipments. Beside the possibility of transferring data onto these heterogeneous platforms there was also the need of creating a way of communication between them. The answer to these priorities is the Web Services technology, which is now the most efficient way of cross-application Internet communication.

Web services are a standardized way of distributing Internet applications and fundamental technologies that are at the basis of this network. Also, web services offer the possibility of interconnecting a wide range of applications, which are available on different platforms and in several worldwide locations. One could say that Web technologies became an Esperanto of application communication, as the new technology opens the gate towards a new age dominated by intelligent applications that make smart decisions and Internet searches, as a basis for well-balanced decisions [Agosta,2000].

Therefore, supposing that we wish to build an expert system that manages a share portfolio, we need to keep in mind that such a system cannot function without constant market quotation updates. Plus, making an optimal decision for selling or buying is a matter of minutes, and this highly influences the efficiency of the system. If a decade ago this system was very complicated due to the lack of efficient means of cross application communication, after the development of Web applications, it became much easier. One would have to develop the classic portfolio management expert and then the link to the outside world would be this paper’s technology. The data containing the quotations will be transmitted via Internet through a web service developed by the stock market. By using the functions and procedures exposed by this Web services, the right parameters can be transmitted, and the stock market informational system will return the requested information. Plus, all of the exposed functions of the stock market system will become a part of the developed applications, and will be called for as similarly developed procedures. You will be able to schedule the automatic checking of stock market quotations and the permanent update of the local database. Things could move even further, with the possibility of inclosing a Web service for the brokerage society that would allow the expert system to not only makes the optimal choice but to implement the decision taken. This example shows how optimal communication automation actually works and how human intervention becomes unnecessary. This has a decisive role in eliminating intentional and non-intentional human errors from the entire process (Jacobides,2000).

XML or eXtended Markup Language is the basis for all of the elements behind the Web Services technologies. Considering the independence from the platform, XML is the engine behind internet data transfers, and the fundament of Web services. XML is in fact “the brother” of HTML (HyperText Markup Language), as the two have a series of resemblances. But there are some distinctions that cannot be overseen. First of all, they have a common origin – SGML (Standard Generalized Markup Language), a general language that, through mechanisms similar to those of classic grammar, offers users the possibility of electronically structuring their data [Airinei,1995]. So, practically, HTML uses a set of tags which fine the way that the information will be displayed in the browser. The set of HTML tags is limited and not

Customizable, and is generated through SGML technologies. Under these conditions, there is no way for you to customize you set of tags, and this lack of flexibility is an important restraint in some cases. So, with applications that use databases, using HTML is improper for transmitting data.

Unlike HTML, XML offers users the possibility of building their own set of tags which can be used for formatting the document. This offers a high level of flexibility, as this element is necessary in defining specialized electronic documents. Normally, you may wonder: if a general language existed – SGML, why was there a need for XML? The answer is simple – by its nature, SGML is a highly complex language, and is very hard to use on a large scale, so a simplifies system was created in the form of XML (Alter 2000,2002). 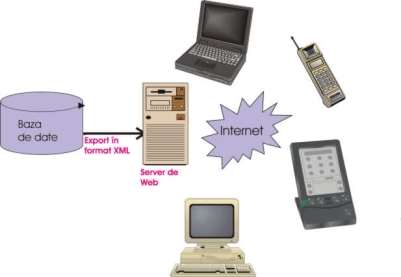 Web services are built on fundamental Internet technologies. So, for transmitting Internet technologies, these solutions use standard HTTP protocol (HyperText Transfer Protocol) and the transferred data is cased in XML files. Considering that both technologies are basic Internet elements, they will ensure the accessibility of the applications on any available platform.

Unlike Web services, its predecessors had the main disadvantage of not offering such a wide portability range. Therefore, DCOM and CORBA were not accepted by all IT&C solution providers, and this would determine limits in their usage. Considering the heterogeneity of the Internet, a technology needs to be supported by the widest possible range of users for it to be considered a universal Internet technology [5]. Plus, DCOM and CORBA technologies use binary files for transferring data and communicating between applications, and this contributes to a lower portability. Unlike these, Web services use XML for data transfer, which consist in simple text files, ensuring a maximum range of portability. Web services use port 80 which is the standard assignation for the HTTP protocol. In comparison, the 2 alternative technologies use their own protocols for transmitting data, and this determines the necessity for additional ports on the application server. In a world that is dominated by the need for a higher security level, this disadvantage of the CORBA and DCOM technologies could have a negative impact over the entire

In conclusion, one could consider that the widespread of Web technologies in the past years comes from their compatibility with the two generally accepted technologies – HTTP and XML. Considering there advantages, the specialists from IDC (a company for surveying and analyzing the IT&C environment) consider that Web services will become the fundamental way of application distribution, surpassing all other alternative ways of application distribution (Damsgaard, 2000).

This paper has chosen Microsoft’s development environment – Visual Studio.Net. I have made this choice considering its advantages as well as its wide spread among developers in our country and abroad.

The .Net version of Visual Studio, that was launched in the beginning of the year, offers an efficient way of development and of integrating Web services into one’s own applications. Considering that XML stands at the basis of these technologies, most available instruments are now using this language. We must add that the ADO.NET (ActiveX Data Object) object collection, used in developing database applications, is based exclusively on this language (Iyer,2003). Also, the new version proposes a common software framework (.Net Framework) that offers the possibility of accessing the libraries similarly by any application that has been written in a language that is compatible with this platform. Therefore, the environment shows a common application development framework, and the common element is CLR (Common Language Runtime). CLR translates any application that has been written in a language that is compatible with the technology into an intermediate language – Microsoft Intermediate Language (IL). The applications that are available in this intermediate method can be transferred and executed onto the desired platform. This platform currently offers 21 application development languages, starting with the classic Cobol and ending with the modern C#. Our example used Visual Basic.Net. (Löwer,1995) Web services will be provided using ASP.Net technology (Active Server Page). ASP is one of the main Web technologies, offering the development of dynamic web pages with database support. The latest version (ASP.Net), offers as a main novelty the possibility of creating and distributing web services. Plus, another set of facilities is included, and here are the most important ones: 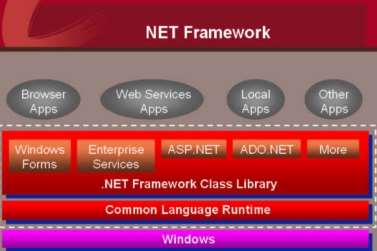 The research was realised for 38 companies that are between the first 200 from Romania considering the 2010 turnover and its main purpose was to identify how the interoperability technologies were implemented. The enterprises come from different fields, such as financial-banking, telecommunications, retail and industry.

The study was developed during December 2011-February 2012 and included a set of questions, from which we mention the most important.

65% of the companies implement solutions for the interoperability of informatics systems, and the rest of 35% plan to implement these solutions within one year.

Although most of the companies apply informatic systems destined to the interoperability of internal informatic systems, the integration with the business partners is extremely reduced. Only 6% of the companies use components that allow the interoperability of their systems with their business partners’. The main reason for this low integration is determined by the lack of national or industry standards.

Only 1% of the participants have informatic systems in integration with those of the public institutions (such as city halls, fiscal administration, etc.). The main reason for this situation is the lack of national standards for the systems integration with different public authorities. The lack of these standards and also the frequent changes are also the reason for the low level of implementation.

The most frequent system integrations are related to web-based systems and different e-business categories (business-to-business or business-to-customer) with ERP systems (Enterprise Resource Planning) implemented by enterprises. In the financial-banking department, the integration is between the Internet Banking and core-banking systems.

We are living in a world that is dominated by the need for interoperability between different informational systems running on different platforms. Under these circumstances, Web services are the technology able of efficiently solving this problem. The simplicity of Web services (simplicity that results from the compatibility with basic Internet technologies) ensures the universal acceptance of this solution as a way of communicating between applications. Plus, the relatively simple way of developing these elements will undoubtedly lead to their becoming widespread. Visual Studio.Net, by its integrated development instruments, became one of the main solutions serving this purpose.