Marine Products, now a days have been a major expanding industry in the global markets and the growth of seafood sector has been recognized as crucial factor because of its extensive demand. India is now looking into this sector as a rapid revenue maker because of intense improvement in its exports. The major importers of our marine products are South East Asian nations, European Union (EU), USA, Japan, China, and Middle East.

The report consists of marine products export analysis, Porters Five Force model and impact of Industrial policy of 1991 on marine products. There has been a huge attention towards this sector after 1991 policy as the restraints have been removed by allowing privatization into the sector.

The Export analysis carried out shows the major items which are being exported with the help of pie charts. There has been data under this analysis which shows how the exports are improved over the previous year in terms of both quantity and value aspects.

Secondly Porters Five Force analysis is carried out in order to gauge the competitive positions of the business and assessment of its industry. As per this analysis, determinants which need attention are threat to new entrants, threat of substitutes, bargaining power of suppliers and buyers and the competitive rivalry. Our analysis shows that threat of new entrants is low in this industry. The threat of substitutes is high due to the presence of readily available products. The bargaining power of suppliers is less whereas that of buyers is very high. The competitive rivalry is high due to reasons like capital barriers. All the reasons are detailed for these five forces in the below sections.

Considering the industrial reforms of 1991, the policies like liberalization, privatization had helped this industry in increasing the private players into this sector. Liberalization of some policies attracted the investors to invest into this industry. Also the concept of globalization improved the attractiveness of this sector in the international markets. As a result this impacted the exports and it showed record growths in the recent years.

The findings from our analysis are that marine products industry is grabbing attention but more schemes need to be developed by the authority which attracts more investors and also improves the exports. The approvals for the firms of this sector are very complex and time consuming processes. Also the substitute products are being available now a days which is causing the demand to fluctuate. So it is essential to take care of these factors in order to improve the growth of this sector.

The marine products industry in India is a source of economic growth after the policy changes in the decade. Key states with good potential for sea food are Andhra Pradesh, Karnataka Gujarat, Maharashtra, Kerala, Odisha, West Bengal and Tamil Nadu. There is huge scope in this sector to develop information technology and infrastructure for adding value and for exports through public private partnership (PPP).

“India offers huge opportunities for the private players in the marine food processing sectors, preservation sectors and for exporters as the country’s marine and fish industry is likely to reach Rs 67,800 crores by 2015,”

According to a study titled ‘Indian Seafood Exports Market: 2014′ of Associated Chamber of Commerce and Industry of India (ASSOCHAM). The Marine Products Export Development Authority (MPEDA)

The Marine Products Export Development Authority (MPEDA) is a government body set up under the MPEDA Act 1972, under the Ministry of Commerce & Industry, Govt. of India. MPEDA is the main authority which takes care of exports of Marine products from India. This authority is present in all states which are rich in marine products. It has been introducing many schemes for the development of production of aquaculture and promoting the exports through its presence all over the country.

Recently in the financial year 2012-13, the exports of marine products had reached an all-time high of Rs 18,856 crores. The exports of marine product exceeded all history records with regard to quantity and value. Exports increased to 928215 tonnes valued at Rs. 18856.26 crores and USD 3511.67 million. In comparison to the previous year, seafood exports showed a growth of 7.68% in terms of quantity, 13.61% in value terms and growth of 0.1% in terms of US$. This aggregation of export figures were recorded amidst the economic conditions in European Union are weak, USA economy still recovering, China’s moderate growth and Japan’s trade barriers in terms of technology. The other impeding factor is continuous depreciation of Indian rupee. There is recovery of supply conditions in these mentioned nations compared to the previous year. Also there is aggravated production of Vannamei shrimp which resulted in higher productivity of Black Tiger shrimp. These improved the chilled item exports which had a positive impact on overall exports. 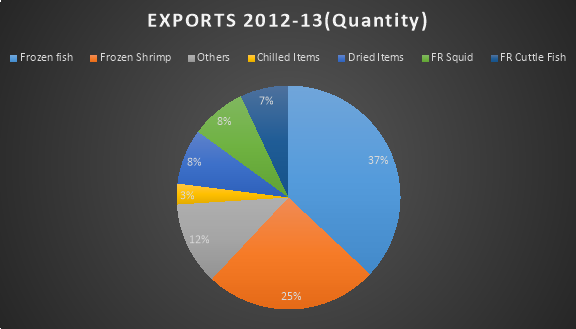 The table shows the exports of marine products during 2012-13 in comparison to 2011-12. The two pie charts give a view of various marine products like frozen shrimp, frozen fish etc. The major items we can see from the pie charts is that frozen shrimp is the main contributor with a share of about 52% in value terms. Fish has been the major export item in terms of quantity and second best item in terms of value.

To begin with, Porter’s 5 forces model is applied on the Indian Marine product industry and following are the highlights of whose detailed analysis has been done subsequently. 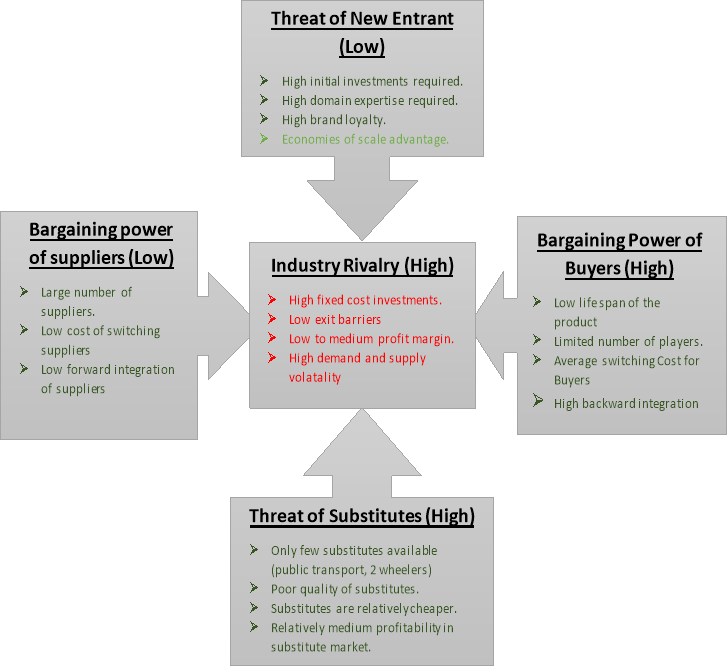 The intensity of rivalry among the firms are higher due to low switching cost of the customer and large firms competing for same customer and same resources. Also a high storage, fixed cost and perishability cost intensifies the competitiveness among the rivals. Hence the overall attractiveness is LOW.

In this industry due to the presence of large number of sellers the competition among the suppliers are very high. It is right to say that all seafood items are seasonal in nature having rainy season as the breeding season. Indian fisherman are unable to meet the cost of new technology of fishing and the price depends upon the importers that they are willing to pay. Charging high price will cause switching to different suppliers and hence they have LOW bargaining power. Also those who are fisherman hardly sells their product in the market by themselves and hence low vertical integration force them to have LOW bargaining power.

Buyers of such food product have the option to switch to the cattle meat, chicken or other non-sea food in case the price of the product increases. Also the buyers in terms of retailers, distributers etc. have high bargaining power because the product has a short life span. Also they pose a threat of backward integration. Overall the bargaining power is HIGH and attractiveness is LOW.

However small players can easily be found in this industry but they do not pose major threat. Threats are posed by the advanced and large players which are less as it requires huge investment and also the process are protected by Govt. bodies like CIFT, MPEDA, CMFRI etc. that has major impact prohibiting new entrants. However in international market the threat is very high as there is low govt. intervention and high technology to suppliers.

Marine products are highly substitutable which makes the demand to be highly elastic. The threat also increases with the IFO specifications imposed by government and increased health awareness of consumers. Also the quality of substitute in terms of health risk is low.

Therefore the high threat of substitute makes the attractiveness of the industry to be LOW.

On the basis of above analysis we conclude that the supplier power and threat of new entrants is low but bargaining power of buyers, threat of substitute and intensity and intensity of rivalry is high in the marine product industry. There is limit to go for product diversification because of the perishability nature of the product. The supply is highly dependent on consumer preference due to which there is change in the demand and can affect the industry adversely. Hence the industry is moderately attractive.

Barriers in seafood trade in India can generally be classified under two categories:-