Network of electricity that intelligently integrates with users actions connected to network for sustainable, economical and secure supply is called smart grid [1]. Smart grid is called smart due to fast communication and networking capabilities. Smart grid has an important role in energy structure adjustment, coping with climate changes and economic development [2].

Since 1982 energy demand during peak hour is increasing 25% approximately every year [3]. New intelligent devices must be used to fulfill energy requirements. In order to add intelligence new technologies are to be developed. Electric intelligence is only requirement for operational cost and energy consumption reduction [4]. These new technologies should be able to remove peak load and off load power difference, should be capable of making demand-supply curve smoother and should reduce environmental pollution. In smart grid user plays a vital role in reducing and optimizing energy consumption thus improving system efficiency. In smart grid emission of CO2 and household energy consumption is reduced by 9% and 10% respectively [5]

In order to improve electricity consumption keeping in view of consumer’s need there should be an optimum solution. Different optimization techniques can be used for energy management. Different technologies like home area networks, home automation, advanced metering infrastructure and bidirectional communication are introduced by smart grid during past few years [6]. Now a days Zigbee and sensor networks not only monitors the quality of power but use powerful strategy for communication and distribution and sale locally generated energy back to grid [7] [8].

Demand Side Management (DSM) system is important utilization efficiency parameters which have been ignored due to complex dynamics of consumption, random behavior of consumers and lack of commutation technology. The advancement in communication technology has revolutionized the power sector and introduced a concept of new modernized electrical system called as Smart grid [9] .The concept of demand side management was first introduced in late 1970’s which reduces GHG, provides reliable energy reducing the electricity cost [10]. Traditional grids consists of DSM but do not provide such type of reliability to users due lack of sensors and inefficient automation and communication. But smart grid is more efficient due introduction of low cost sensors, smart meters and integration of ICT [11]. Challenges faced by smart grid is shown below 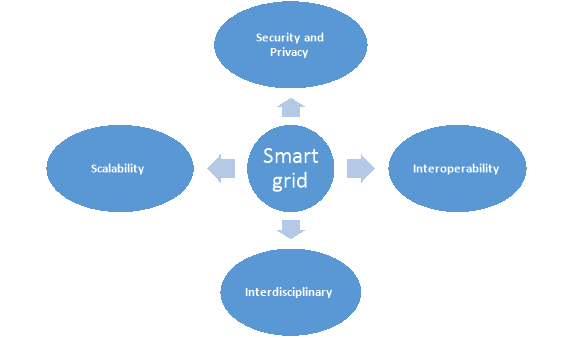 Interoperability is said to satisfy if multiple communication network coexist in smart grid. Scalability means increasing number of hardware’s in proportion to others but due to increase in demand this become a major issue can be solved by using sensing networks. Smart grid holds different communities and societies which become an issue in order to resolve it integration of power system is required which is done with actuation, security and communication networks. Security is main issue in smart grid because a hacker can interrupt the data of smart grid and easily access to smart meters so this issue can be resolve by modernization the security and by data hiding [12].

The smart grid consists of HEMS that enable demand response and demand side management. On the basis of power supply demand response is responsible for altering and managing the energy and demand side management (DSM) controls the planning, techniques and implementation of policies [13]. There are two major schemes of HEMS one is communication and 2nd one is optimization [14].

HEMC provides customer’s user’s friendly graphical representation which not only provides assistance to customers but also give them control over various loads using load scheduler.

The information load control, line control and on/off control is provided by home tab on/off control use in switching sequence and its major application is that it is used to detect any abnormality in hardware. The data logging of current and voltage with in time is represented by data tab.

Load scheduler considers the bundle of single knapsack known as multiple knapsacks due to which customers become aware of peak load at specific time and interval of occurrence. A load scheduler not only determines the critical and non-critical loads but also time dependent loads. In emergency conditions it also controls various loads. This also stores data of electricity consumption 24/7.

Energy management is an organized and systematic coordination of procurement, conversion, distribution and use of energy to meet the requirements, taking into account environmental and economic objectives [16]. Energy management systems are computer aided tools that are used by operators of utility grid for controlling, monitoring and optimizing the generation and transmission system performance.

In efficient energy consumption the participation of end user is as much important as the supplier. In modern power supply systems end users’ are provided with RT-feedback (real-time feedback) via different website portals, in-home displays (IHD), or some other feedback viewer device like mobile etc. [17]. Provision of feedback to end user will motivate them to alter their energy usage to minimize the electricity bills.

In present smart grid system end users’ are forced for shifting their energy usage on peak to off peak hours regardless of their comfort and life style [17]. All over the world major portion of energy is consumed by residential users, so they can play an important role for energy optimization. Research shows that energy consumption is minimized by 12% by installing energy consumption information system and displays energy consumption of whole unit [18].

Due to advancement in technology the industries has become advance due to which energy demand increases which results in load shedding and blackouts and use of fossil fuel is increases which will finish soon. Now world is going toward non-conventional energy resources like solar and photovoltaic cells but in order to provide information regarding to electricity to customers the smart hems use analogue and digital systems which is an efficient methodology. 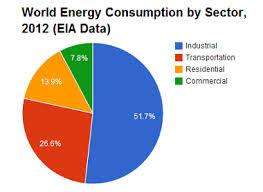 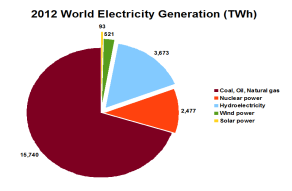 It is the linear programming model basic purpose of this model is minimization of electricity cost at residential areas [1]. In this scheme a day of 24 hours is divided into equal time slots having equal lengths consists of various prices of electricity like time of use (TOU) tariffs. The objective function shows that with proper scheduling we can reduce the energy expenses by division of home appliances in time slots. ?????

Objective function is defined as

This scheme use smart appliances like energy management unit (EMU) and wireless sensor home area network (WSHANs) for communication purposes between appliances (IHEMS). It also uses (Zigbee) protocol, wireless sensor networks and cluster tree topology. In this scheme customer may turn on appliance at any moment without being worried about peak hours. In home energy management (iHEM) gives suitable time to customer for appliance use. ????

How iHEM works a request package is sent by appliance to EMU at the start, on receiving the packet EMU communicates with storage system in order to know available energy. Energy management unit (EMU) than communicates with smart meter for current prices. The storage unit send available reply containing information about storage energy when EMU receives packet, it schedules the suitable start time according to iHEM algorithm. It also reduces the carbon emission and energy consumption cost.

The single knapsack is a problem of combinatorial optimization having objects, values and weights packed into knapsack of specific capacity such that value of object is maximized [19] .The multiple knapsack is generalization of single knapsack problem it is resource allocation problem consists of M resources and set of N objects [19]- [20]. Knapsack problem is basically an items set that have different weights and values. Our choice of item must be in such a way that it should be maximum among the weights of given items.

Knapsack allows community to use energy efficiently in order to achieve their goals. It not only minimizes the customer bills but force them to use their heavy appliances other than peak hours. It is estimated that energy demands overall around the world increasing 25 percent per year so its great challenge for us to fulfill the demand [21]. In order to overcome the increasing demand of energy we need to optimize energy usage. Knapsack is one of the optimization technique used for optimizing a problem.

2.1.1) 0-1 Knapsack problem (binary Knapsack): In such case the item is either taken or not taken (accepted / rejected) there are no other possibilities. Suppose a set of ’n’ items having different weights and values say ‘wi’ and ‘vi’, xi is the number of copies of item of set ‘n’. In mathematical form:

2.1.2) Bounded Knapsack Problem: In bounded knapsack problem restriction on xi is removed i.e. xi is an integer value in BKP. In BKP restriction is applied on copies of each item of set ‘n’ to some integer value say ‘ci’. Mathematically:

2.2.1) Brute Force: It is a straight forward approach based on statement of problem and concepts’ definition. If there are n items that can be chosen from a set of given items then there will be 2n possible combination of items for knapsack. There is a bit string of 0’s and 1’s, if the string is 1 of an item then it is chosen if 0 then not chosen.

2.2.2) Dynamic Programming: It is a technique in which a complex problem is divided into smaller sub problems. These sub-problems are then solved and are recorded in table. Thus table obtain is utilize to solve original problem.

The complexity of this algorithm is O (NlogN).

2.2.3) Greedy Algorithm: This algorithm requires some common sense and problem solving experience for solving problem. It’s a decision making process which may have following steps:

1) Choosing such item that has maximum value in knapsack.

2.2.4) Genetic Algorithm: It is an algorithm used to search best solution among different possible solution of a problem. It begins with a solution set and each set is called population. A new population is made from old population by selecting them according to certain specified fitness level.

3) Appliance Usage Control: In [23] consumption of electricity is not always rational it also depends on human psychology factors. Different people use different appliances at different time slots. Now if we consider some appliances we can classify them into following categories:

1) Must Run Appliances: Appliances whose time slot cannot be changed and they must run comes in this category.

2) Fixed Run Appliances: Appliances that run only once a day at specific time.

3) Flexible Appliances: Appliances that can be run at any time in a day they don’t have fixed time.

Some of the household devices are shown below: 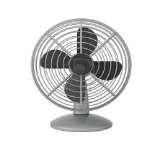 Considering human psychology factor the use of appliances can be categorize as:

1) Emergency Use: Appliances that use in some sort of emergency.

2) Welfare: Appliances that use for welfare

3) Enjoyment: Appliances that use for enjoyment purpose.

Taking an example of personnel computer that is used by student for his working purpose or for emergency while an adult use it for enjoyment purpose.

In order to make decision on which appliance should be used during peak hour follows analytic hierarchy process.