Title: A Study of GST Effect to the Malaysia Construction Cost on Housing Project.

Government Service Tax (GST) or also known as Value Added Tax (VAT) in some countries is an indirect broad based consumption tax that imposed on the sale of goods and services (Philip, 2012). As mentioned and emphasized by our Prime Minister, Dato’ Seri Najib Tun Razak on the reading of Budget 2014 that GST is not a new tax system, in fact this taxation has been executed for 160 countries in the world where only 41 countries have not been implemented yet (Siti et. al, 2014).

Malaysia is soon to implement GST start from 01 April 2015 with the rate of 6% to replace the current practice of tax system which is the Sales Taxes (10% and 5%) and Services Tax (6%) that has been used in our country for several decades (Budget, 2014) The introduction of GST is aim to increase the government’s revenue and reduce the fiscal deficit that suffers us for nearly 30 years since 1980 with the means that for only 5 years, Malaysia had facing a budget surplus which is the year of 1992 to 1997 as shown in Figure 1. 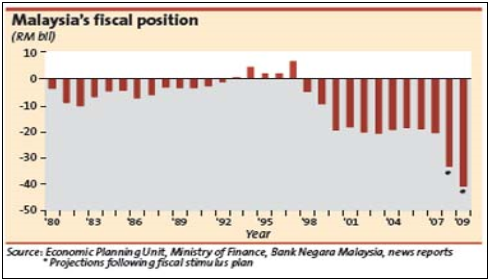 Due to GST is a well-developed, effective and fair taxation at government perspective, therefore, it is believe that it will be the one of the solutions to overcome the situation of continues fiscal deficit by creating a consistent source of revenue and generate a strong and sustainable fiscal position to support the long term economic growth (RMCD Official Website). In order to implement the GST successfully, government has focus on 3 aspects which is People, Process and Technology as their fundamental strategy (TheSunDaily, 2013)

Since GST is a new tax system that being proposed in our country, government had put a lot of effort to promote the system through training, seminars, guidelines and also postponed the implementation for several times which was schedule to be implemented during 3rd quarter of 2011. These is to enable the government to engage exclusively with all segments of public and to allow the public have a sufficient time to prepare, ready and have the understanding with the GST operation and transactional system (Official Portal of MOF). With the aggressive effort provided by government and the public cooperation, Malaysian is now getting start understands the GST concept as mentioned by the Domestic Trade, Cooperatives and Consumerism Minister Datuk Seri Hasan Malek (TheSundaily, 2014).

Prior to the implementation of GST in Malaysia, the primary group affected due to this broad-based consumption tax are the consumers (Godsell, 2013). Regarding to Datuk Ahmad Maslan, Deputy of Finance Minister, price level on cost living will not increase but will decrease logically as those items which being charged 16% of SST will then change to 6% of GST only. However, a study conducted by Aaron, 1981 shows that adoption of GST had increase the price level. Further, regarding to Burgess, 1998 state that GST implementation will result inflation. Inflation occur when increase in prices level and this will results in lower real wages of workers, which is also consumer, and thus resulting decrease of purchasing power. If increase the money wages of worker, it would then burden the business cost and cause to less profit maximization; to maintain the firm’s profit, it would increase the price level and this cycle will repeat and repeat as illustrate on Figure 2. 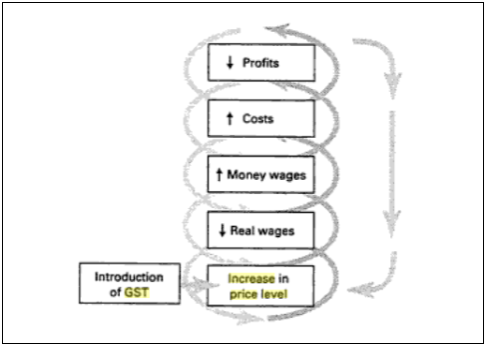 Construction sector were almost face like above scenario. In a nutshell, introduction of GST will impact the price of building input and thus affect the developer business cost eventually the property value.

It is a known fact that there is a relationship between price and properties. According to the property consultancy WTW, implementation of GST in Malaysia had brings construction industries concern and worry on the likely cost increase about less than 5% on the construction cost (Hisyam, 2015). Besides that, this statement is also supported by Botha P, 1990 that the introduction of GST would result an increment on the building cost between 4% and 7% regarding to the case of the South Africa, who implement this type of tax system on 1991. Furthermore, according to the chairman of Construction Industry Forum, Eric Lee said that the subsequent to the implementation of GST would rise at least 5% on the building cost of a new residential housing in Guernsey – an island in the English Channel (GuernseyPress, 2014).

As regards to the GST Bill 2014, clause 4 and GST Guide on Property Developer 2014 defined the ‘supply’ as all forms of supply or as treated as supply of good and service including the importation of goods into Malaysia. There are two supply constitute in property, that is supply of goods and supply of service. Transfer of ownership in land is an example of supply of goods whereas any lease, tenancy, easement license to occupy or transfer of undivided share in land is considered as supply of services. This means that all of the goods and services provided in construction supply chain that some of the component that are currently free from SST is now subjected to charge 6% of GST (Cheng, 2014).

For example, the structural elements, architectural elements, finish elements, services elements, M&E works and so forth will be all being charged 6% of GST. Regarding to the calculation conducted by WTW as illustrated on Figure 1, it was found out that, cost of construction materials is anticipated growth up to nearly 4% once GST is being conducted (Hisyam, 2015). Further, this 4% is not yet encountered the operational cost and labour cost. As a result, as mentioned by the Sheda secretary-general, Sim Kiang Chiok claim that with the increment cost of any supply, it wills naturally torrent into an increase in building costs (Sharon, 2014). 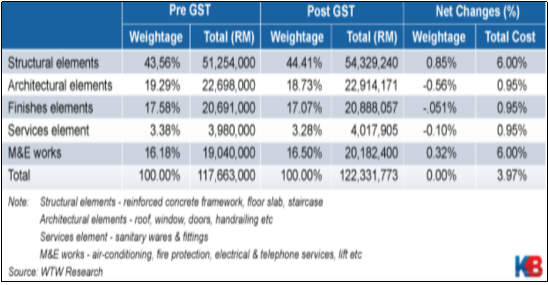 Figure 4: Comparison Cost of Construction Element before and after adoption of GST (Hisyam, 2015).

However, rising of building cost is not the only one worried to the construction developers. The members of construction developers expressed fear and worry on the exempt tax on residential property. Datuk Neoh Soo Keat response that while residential properties is exempted from GST, it does not mean that cost of supplying these properties namely constructing, developing and selling will be free from GST as developers will still have to pay the tax on nearly all areas involved, especially the materials to construct housing (Eva, 2015). Succinctly, the developer needs to pay the GST on building goods and services that had been charged by supplier but cannot claim or impose GST on the residential buyers.

It was also stated by Datuk Ng Seing Liong, chairman of Malaysia Property Expo (Mapex) that, instead of being zero-rated on residential property, the GST exemption leaving the developer who also acts as a seller unable to claim backs the 6% of input tax. In other word, the developers were now not able to directly pass on the higher input costs to the buyers (Ooi, 2015). Concurrently, the cost of business will increase, because the supplier is not subjected as exempted tax (Nurul, 2014).

Due to the exempt tax, developer now had 2 options to consider which was either increase the property price or reduced the profit margin gain. However, according to Dwivedi, 2012, the sole objective of business firms is to maximization of profit. Further, regarding to Sabarwal, 2004 states that, when market is in equilibrium position or also known as complete market, a corporate objective is to make profit maximization. Besides that, Marc, 2012 also stated that profit maximization is the only legitimate corporate purpose. Therefore, profit maximization will be the prior consideration; meanwhile reduced profit margin will be the last option that developer will regard.

In order to maintain the profit margin, developer will increase the sales price and charge on the consumer indirectly. As illustrate on Figure 3, the final cost on residential properties to the consumer will be higher before the implementation of GST. Ultimately, the property price will be rising as estimated 2 to 4% (Goh, 2015). 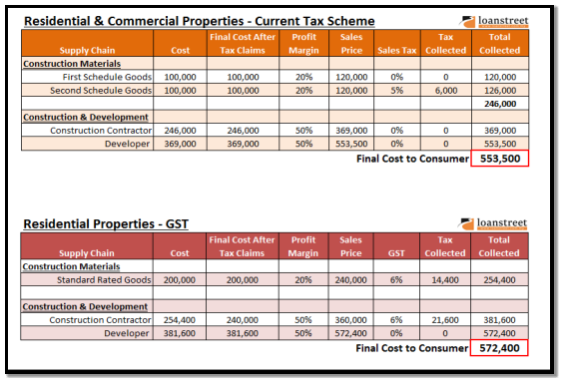 Figure 5: Comparisons the Cost on Residential Properties before and after the implementation of GST

Moreover, regarding to the case of Australia with the 10% of GST since 2000, Gold Miles give a prospective that the price of property will increase same value with the GST rate, which is 10% (ACCC, 2000). Additionally, Rehda also stand with the above point of view that once implementation GST, it will cause developer face into financial hardship circumstance. In other scenario, the house price will be increase accordingly with the adding cost of development. As a result, higher property price will pass on to the house buyers.

In short, the cost charged due to GST will likely transferred to the buyer hence the price of the residential properties is increased accordingly (TheBorneoPost, 2015). Although the residential property price is anticipated increase not more than 3% to 4%, which is still lower than 6% said by Tan Sri Abdul Rahim Abdul Rahamn, yet, the property price is rely on the market’s supply and demand mechanism (Toh, 2015). According to Levin and Wright, 1997 housing price will increased when there are more buyers than seller. Thus, market demand and supply is the determinant of housing value (Thean, 2014).

However, if the market condition is not allow, the residential property developers will have made a decision to absorb the extra cost themselves and reducing the profit margin (Nurul, 2014). Likewise what Ong, 2015 describe, the developers will bear the additional cost that being charged and so reducing the profit gain. According Nurul, 2014 to less profit will be gain if the developer bears the GST. It was also supported by Rusnani et al. 2014; price of the inputs for residential property will increase accordingly with the introduction of GST due to the exempt taxes that disallowance claim of input credits.

Eventually, by absorbing the extra cost and reducing the profit margin due to 6% of GST, it will result rising on developer business cost. According to KPMG, 2013 survey state that 58% respondents believe that GST had bring a negative cash impact to their business. What’s more is that, developers are already being taxed average 2.75% of stamp duty on the land and property transaction currently (Property Outlook, 2014). In order to tolerate with the possible impact on developer and the property market, Rehda had proposed a request to the government to reconsider the taxes in residential market into zero-rated tax system so that developer can claim the input cost and not affect the property market.

The question which now comes across is whether the developer willing to absorb the input cost or increases the property price. Thus, this study is aim to identify greatest building cost component that impact on developer and thus influence the housing market further with the suggested initiatives to cushion the impact.

H1:Rising of construction cost due to GST has a significant impact to the developers. H2:The impact gain from developers will increase the property price. H3:Housing buyers will then bear the impact.

Based on the problem statements, following questions are posed:

Due to price of the housing is determined by developer, therefore, it is necessary to find an initiative to soften the GST impact to the developer. Thus, three objectives are established as below accordance to the problem statement that has been identified.

This study can bring benefit to:

This study is focus on the GST exempt tax on residential property. Due to time constraints, the study will only conducted at Penang area only which will limit on new housing property only. Further, the construction parties that will involve in this study are the housing developers and an expert from Rehda (Penang Branch) so that to achieve the objective and support the findings.

The study will apply a dual method which is qualitative and quantitative approach to underpin the data collection. A summarized flow chart throughout this study was shown as figure below. 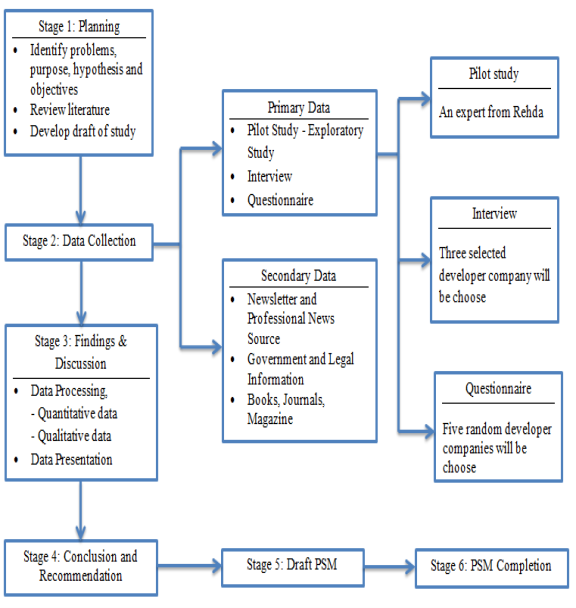 This chapter mainly introduces the study background and figure out the problem statement in the implementation of GST at Malaysian construction industry.