Skip to content
Notice :
2011 Japan Earthquake and Tsunami: Ethical, Legal, and Political Implications Tesco's Entry into China Ackerman’s Neoliberal Argument on the Causes of Corruption A company operating A Comparative Analysis of the Secessions of Iceland and Norway
Order Now
To the Unknown Painter, a painting made of oil, acrylic, latex, emulsion, and shellac, was created by Anselm Kiefer in 1983 (Figure 1). A palette adorned upon a pedestal sits in a vacated space surrounded by tattered columns while casket-like shapes seem to lay on the ground around the pedestal. Dark colors envelope the horizon while reds, browns, and whites color the columns. The palette sits directly in the center, almost unrecognizable, with a thin pedestal that matches the dark blue and black of the horizon. Straw is stuck on with a planned randomicity, giving it a scratchy and messy look. Although the area is physically empty, it is filled with Kiefer’s own victimhood and memories of traumatic events during Nazi Germany[1]
Empty interiors of Nazi architecture, specifically referring to the courtyard of Hitler’s Chancellery in Berlin designed by Speer, are used as a space for traumatic memories that will not be mourned or a space of internalization. Kiefer, a German himself, was born shortly before the Holocaust ended, so he did not experience much of the horrors many people lived through. The walls of columns suggest the Nazis and German rule keeping hidden the actions they had committed against millions of victims. Whereas the palette represents himself, a painter, who is stuck among the past and judgments of the present. The messy and scratchy texture simulates how Nazis would destroy artwork that were not in agreement with the German power.
The painting speaks towards not only about himself, but towards the Germans and the Jewish. The empty space holds a memorial for traumatic memories of the Holocaust. Suspended in the center, the palette mounted on a pedestal becomes a memorial for Kiefer’s own sense of victimhood[2]. The palette, representing the victim, appears to look like it is trying to rise above the past and move on from those horrific events. Because he is German, he imagines himself as the victim of a burdensome historical legacy, unable to be unselfconsciously German because of the judgements passed on from others[3].
The painting brings people to the attention that not only what had happened was horrible, they shouldn’t continuously badly judge and criticize current German’s who had no control of their ancestor’s choices. While the palette is reminiscent of a helmet resting upon a gun, it relates to a fallen soldier in a battle. Memorializing his life and what he went through. The battered architecture brings us back to remember that it is also a painting as well as a representation of memories being held within the space. Although the space seems to hold memories, the columns seem to be breaking and letting the memories go so they can be mourned and remembered instead of being repressed. The architecture reaches to the back with a one point perspective as if it is reaching towards the past.
There could be two different interpretations from the painting from two different audiences, the Jewish and the Germans, or himself. The Jewish could interpret this as a way to memorialize the victims during the Holocaust, those who died because of German power. Casket-like shapes on the ground could represent these victims. Kiefer made a problematic claim that he and other German’s are victims as well because of the claims that they are still like they’re ancestors, so they will continue to carry around the burden of being German. The painting brings the attention of more about the scene of repression and how people shouldn’t hold in the memories and be able to mourn them and let them go.
Kiefer painted this along with a few others in a series, one of which is Tomb of the Unknown Painter. Doing research, this painting and To the Unknown Painter both came up when trying to find information, although more sources were available for this one[4]. Both of the paintings are similar in that they both use the same materials and contain a scratchy texture, attained with straw. Instead of a palette on a pedestal, a tomb sits upon stairs within a similar looking space. They represent similar things, traumatic events and a memorialization of those victims. The colors are dark, representing the dark past, mixed with strokes of bright colors such as red and yellow.
Overall, Kiefer displays a controversial topic about the German victimization that has an impact on millions of people and can open people’s eyes to the reality of stereotyping and judgement upon them. His point is to get across that people should not continue to blame others for their ancestor’s actions, rather mourn the past and move on with a rebirth of a society.
Word count: 814 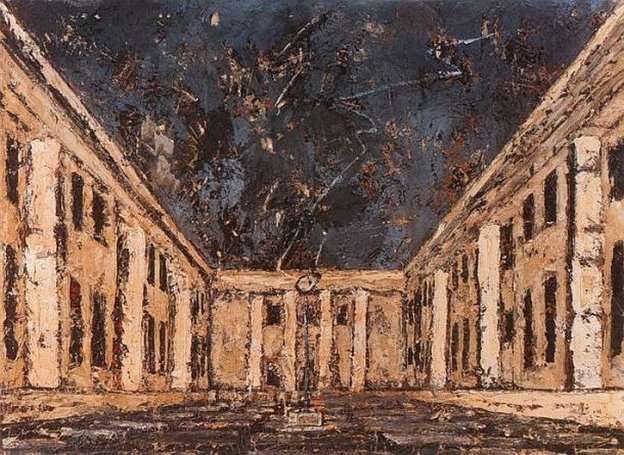