Macroeconomics is a branch of economics dealing with the performance, structure, behaviour, and decision-making of an economy as a whole, rather than individual markets. This includes national, regional, and global economies. The factors that are studied by macro and micro will often influence each other, such as the current level of unemployment in the economy as a whole will affect the supply of workers which an oil company can hire from, for example.

There are only a limited number of resources such as workers, machines, factories, raw materials etc. Yet there are a number of different ways in which they could be used. Similarly people only have a limited amount of money. Yet they have lots of needs and wants to satisfy. Also the Government has a limited amount of money!!! However, it is unable to satisfy all its wants. The BASIC ECONOMIC PROBLEM arises because resources are scarce, but human wants are unlimited. Any resources that are not scarce are called FREE GOODS. The air that we breathe seems without limit and so is considered to be a free good. However, with increasing pollution in the world, fresh, clean air may be scarce.

Price is derived by the interaction of supply and demand. The resultant market price is dependent upon both of these fundamental components of a market. An exchange of goods or services will occur whenever buyers and sellers can agree on a price. When an exchange occurs, the agreed upon price is called the “equilibrium price”, or a “market clearing price” . This can be graphically illustrated as follows: 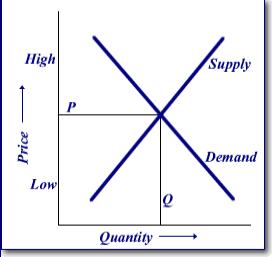 re consumers decide whicgoods and services they want and businesses provide these. Mostare privately owned. The USA is an example of a market

Both buyers and sellers are willing to exchange the quantity “Q” at the price “P”. At this point supply and demand are in balance or “equilibrium”. At any price below P, the quantity demanded is greater than the quantity supplied. In this situation consumers would be anxious to acquire product the producer is unwilling to supply resulting in a product shortage. In order to ration the shortage consumers would have to pay a higher price in order to get the product they want; while producers would demand a higher price in order to bring more product on to the market. The end result is a rise in prices to the point P, where supply and demand are once again in balance. Conversely, if prices were to rise above P, the market would be in surplus – too much supply relative to the demand. Producers would have to lower their prices in order to clear the market of excess supplies. Consumers would be induced by the lower prices to increase their purchases. Prices will fall until supply and demand are again in equilibrium at point P. 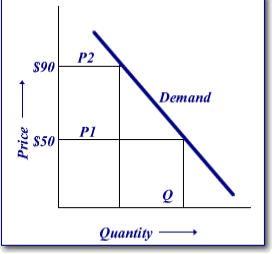 When either demand or supply changes, the equilibrium price will change. For example, good weather normally increases the supply of grains and oilseeds, with more product being made available over a range of prices. With no increase in the quantity of product demanded, there will be movement along the demand curve to a new equilibrium price in order to clear the excess supplies off the market. Consumers will buy more but only at a lower price. This can be illustrated graphically as follows: 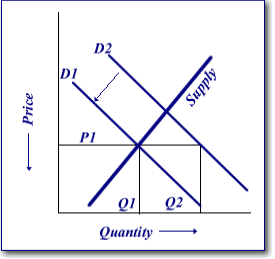 Likewise a shift in demand due to changing consumer preferences will also influence the market price. In recent years there has been a shift in demand on the part of overseas Canadian wheat buyers toward the Canada Prairie Spring varieties, away from the Hard Red Spring varieties. A decline in the preference for Hard Red Spring wheat shifts the demand curve inward, to the left, as illustrated:

Gross domestic product (GDP) is the market value of all officially recognized final goods and services produced within a country in a given period of time. GDP per capita is often considered an indicator of a country’s standard of living. Example:

The value added in each process is illustrated below:

Let’s assume XYZ Company is considering building a new $50 million factory. If a bank agrees to lend XYZ the $50 million dollars but requires XYZ to pay back $55 million at the end of the year, we can calculate that XYZ willpay $5 million ($55 million repaid – $50 million principal) to borrow the money. This translates to: Interest Rate = ($5 million) / ($50 million) =10% interest

Various functions of money can be classified into three broad groups:

According to The times (2013) many corporations have finance department who are responsible to create different financial information which leads to decision making, in addition to that they also make profit and loss accounts to get a better insight to the issue that whether the organisation is making effective use of financial capitals. Other roles of finance department can be classified as follow.

This current and updated information help an organisation or a business to make appropriate decision such as:

Funds are planned for the future. Managers are able to screen finances in order to highlight different and ongoing adjustments to the plans. Financial statements such as the profit and loss account and the balance sheet give information about the performance in the past. These statements can be compared with the results attained by similar corporations or in former time periods to ascertain areas for improvement. For example, if a firm spots that its cost of sales is higher than those of competitors it may pursue an alternative supplier, or take other actions such as reducing direct costs.

Financial information provides irreplaceable statistics and indication on which managers can make informed decisions and plans.

It can be defined as a social science dealing with economic problem and human economic behavior. It deals with human behavior in terms of consumption, production and distribution.

According to slid share, decision making includes the use of scarce economic resources which are merchandized in the marketplace at a price. However, many dynamics apart from the financial impact, such as individual taste, social factors, environmental factors, religious and/or ethical factors, and administration policy, they must also be considered.

Economic decisions usually involve an within or outwards flow of money or fiscal equivalents. Economic decisions are made in many different markets, whether its retail, wholesale, the stock market, local or international. Hence, if choice makers are to make knowledgeable decisions then some information of accounting measurement systems, concepts and standards is necessary.

Economic information can be very valuable tool when making investment decisions because it can give awareness into what is presently fashionable in our world and what could occur in the future, based on past data. In order to use economic data well, one must have knowledge of basic economic philosophies as well as a precise source for information and analysis.

For instance, The National Bureau of Economic Research (NBER) gives information and analysis for the US. It is NBER is a non-profit, independent organization whose goal is to provide precise information, research, as well as policy proposals for policy creators, experts, and the academic community. It is led by a Board of Directors that is comprised of representatives from major US research universities, major national economic organizations, and prominent US economists. They select upon what research will be carried out by the bureau as well as the rationality of the outcomes from that research. From this exploration stems one of the main jobs of the NBER, publishing reports covering a variety of economic fields that pertain to many different sectors of our economy.

These reports use statistical information as well as practical models used by specialists in order to draw conclusions about popular topics such as immigration, monetary policy, business, and employment, among others. Similarly, economic data can provide an overall economic decline in quantified economic indicators including GDP, real income, employment, industrial production, and wholesale retail sales. Hence, a corporation can invest its income according to their economic conditions, can extend their brand, or improve areas that need more investments.

There are two policy instruments in Macroeconomics that can predict economic consequences of a country, they are

It describes the experimental symmetries relating to fiscal policy variables, the level of expansion, and the rate of progression. Various data are deployed such as, past data, recent cross-section data and afresh constructed public share series. There is a solid link between the expansion level and the fiscal structure, for example, underprivileged states count heavily on global trade taxes, while income duties are only significant in industrialized economies. Furthermore, fiscal strategy is influenced by the scale of the economy, measured by its inhabitants, investment in transportation and communication is regularly linked to growth. The only thing that is isolated in this regard is that the effects of taxation are challenging to separate empirically.

In an unrestricted system the monetary authority can print additional money and create more price increases than people expect. But, although these increase amazements can have some paybacks, they cannot ascend analytically in equilibrium when publics comprehend the policymaker’s reasons and form their expectations accordingly. Since the policymaker has the power to make inflation shocks ex post, the equilibrium progress rates of currency and costs turn out to be higher than otherwise. Therefore, obligatory commitments (rules) for monetary behavior can improve matters. The repeated contact between the official and the private agents, it is likely that reputational powers can standby the formal rules. An example of a reputational equilibrium, where the consequences to be weighted from decision and the ideal rule. In particular, the rates of inflation and monetary growth look more like those under agreement when the discount rate is high.

Hence these policies can be implied to predict an overview the economic consequences of a country’s variable circumstances such as environment, political situations and flow of money.