How does Globalisation discourage inflation in OECD countries?

How Does Globalization Affect China Inflation?

In this advancement era, communicating and sharing of cultures between countries has become much easier. Not only that, good and services can be consumed by country that are not being produced within the country. For example, in countries that have two good or services only, country will be producing good that they are good at producing in term of comparative advantages or even through theory of abundant factor of production. This mean, country will export the good that they are good at producing and importing good that they are poor at producing. Globalization makes import and export between countries possible. What is globalization? According to BBC, globalization is process by which the world is becoming more interconnected as compared to before. This is because; globalization is the mean of the worldwide movement toward integration in term of economic, financial, trade and also communication.

The history of Globalization has begun century ago, however, different economics, have different opinion on when globalization actually begin. Some economics that agree with Adam smith, believe that globalization happen on two most important events that is being recorded in the history. The two major event that are related to globalization is significantly dated in 1492 in event of Christopher Colombus stumbles on the Americas in search of spices and 1498 in event of Vasco da Gama makes an end run around Africa and snatched monopoly rents away from the Arab and Venetian spice trader (Kevin H.O’Rourke, 2000). Some economics like Andre Gunder Franks believe that globalization begins only from 1500 onward and economics such as Jerry Bentley argues that globalization begin even before 1500. A test was being carried out to test the globalization impact on economic. The test looks at the connection between factor price, commodity price and endowment worldwide. However, in the year 1492 and 1498, there is no evidence showing that globalization occurs in the two year. Only in the 19th century, there is abundant of evidence support that in this century, a big globalization bang has occurred. (Kevin H.O’Rourke, Abstract, 2000).

The reason for globalization to occur in a large scale is because the advancement of transportation, technology and reduction of tariff. With the advancement of transport such as containerisation have make transportation of good from one nation to another nation much more efficient and also cheaper. Containerisation is the use of common size of container to transport good from one nation to another nation. In addition, advancement of technology such as internet has contributed highly to sharing of information and also enables people to communicate around the world. Tariff is used to increase the price of the imported good. With the support of World Trade Organization (WTO), who aims is to encourage country to trade in a free trade barrier environment. With the reduction of tariff, people will be able to consume more of foreign produced goods and services. Other than that, mobility of capital and labour also contributed largely to the globalization era that we are facing in today world.

Many countries have tried many ways to control their inflation. This is because, if inflation is too high, the cost of living of a nation will be high, and eventually affecting it standard of living to fall. Inflation refers to the rate at which price level of general good and services is rising. With the raise of price level of good and services in a country, purchasing power of consumer in the nation itself will fall. Inflation rate is being measured by percentage change in Consumer Price Index (CPI) . Consumer price index is the weighted average of good and services that are being purchased by a typical household. Some cause of inflation is the market power, demand pull .asset market boom and shock supply (T.Harvey, 2011). One of the examples is that during an economic expansion, household will have surplus of money. With this abundant of money, household will increase their demand of good and services. Thus, in response toward the increase in demand for goods and services, firm will have to increase the price of good and services to reduce the demand. This increase in price level in response of high demand is an example of inflation

How does Globalisation discourage inflation in OECD countries?

A research has been conducted on the OECD countries regarding the impact that globalization has on inflation. The research included a sample of 22 OECD countries that consist of Australia, Austria, Belgium, Canada, Denmark, Finland, France, Germany, Greece, Ireland, Italy, Japan, Luxembourg, Netherlands, New Zealand, Norway, Portugal, Spain, Sweden, Switzerland, UK, and the USA. The research uses KOF-index as a measurement of globalization which cover the economics and social and political dimension of globalization as proxies for globalization and simple average inflation as a measurement of inflation (Pehnelt, 2007). The result has shown that (Appendix 1) that as the KOF index increases, the inflation rate has decreases. There are several reasons that have contributed to this negative relationship between inflation and globalization which are the import price effect, global competition effect, labour market effect and so on.

The import price effect is one of the factors that has contributed to the result that KOF index and Inflation are negatively related. With globalization, comparative advantage and also economics of scale can be achieved. This is because, integration of low income into the world economy and also the enhancement of division of labour. There is two function of import price in a globalized economy is that it have direct influence over inflation and also can be used to determine the domestic price of good and services. In the particular sector, the downward pressure of import price can influence the domestic inflation by lowering them down. As the import price fall, it will also have a direct impact on the fall in the consumer price which is proportion to the share of import in the actual consumption basket. Since imported good are being used as a substituted for domestic product. Therefore, when imported price decreases, it will eventually cause the overall inflation rate in the country to fall as well.

Another reason that affects the KOF index to have a negative effect with inflation is because of the global competition effect. In general global competition refer to the good and services that are being provided by competing companies to serve international customers. With a higher import penetration, OECD countries have experience enhanced competition in their country. When a country has experience an enhanced competition that result from higher import penetration, it will limit the monopoly power of its domestic producer. This causes, domestic producer to be unable to increase the price of good even if the domestic demand increases or even cost of production increases. It means that as country experiencing an economic integration, respective country will be experiencing a higher price elasticity of demand. This causes domestic firm to reduce their mark-up price. Since it is an elastic demand curve, by reducing the mark-up price will induce more customers to purchase the good. This is because, in an elastic demand curve, a percent decrease in price will induce more than a percent increase in the quantity demand in the economic. However, the size of reduction in mark-up price is depending on the intensity of the foreign competition. The more open an economy is , the higher the competitive pressure it put on the domestic producer.

Other than that, labour market effect also plays a role in the negative relationship between globalization and also inflation. With the integration of huge developing and newly industrialized countries into the global economy, it has put a downward pressure on the wage rate in OECD countries in certain sector. This is because as more country enters the global world, the supply of labour in the labour market will increase and it wills eventually causes the economy to experience a decrease in the wage rate of worker. With a lower cost of production, it will cause the production of good to be produced at a cheaper cost. Thus, as the cost of production decrease, it mean that price of imported product will decrease. Therefore, it shows that as a country becomes more globalized, the country will experience a fall in product price in certain sector.

According to the Globalization Hypothesis (GH), it stated that the internationalization of the good and financial market has led to the increase of the dependence of the national macroeconomics outcome which is inflation rates and business cycle on the international factor (Francesco Bianchi, 2013). Not only that, Economics Ben Bernanke said that “When the offsetting effects of globalization on the prices ofmanufactured imports and on energy and commodity prices are considered together, there seems to be little basis for concluding that globalization overall has significantly reduced inflation,” said Bernanke. “Indeed, the opposite may be true.” (Chen, 2007)

How Does Globalization Affect China Inflation?

In the year 2006, China has experience an increase of 30% in the price level or energy metal and agricultural product. The reason for the raise in the commodity price of good in China is because of the raise in the demand for commodity in the growing of world economy. Not only that, As time goes on , Chinese are becoming more richer and the middle class citizen are growing . This show that the demand for food and food related product will increase. However, the supply of food has fall due to the development of housing and commercial on the arable land. Arable land is land that is suitable for the growing of crops. Thus with arable land being used as a housing area , the supply of food for China has decreases. With globalization, the change in the use of land and also increasing demand could result in a higher structural increase in the food price. Not only that the stagnant of the supply of commodities create an even greater world demand for product and may result in a even higher price increase. As show in the in appendix 2, it indicates that as years pass, the entire commodities price in the world has increases dramatically. 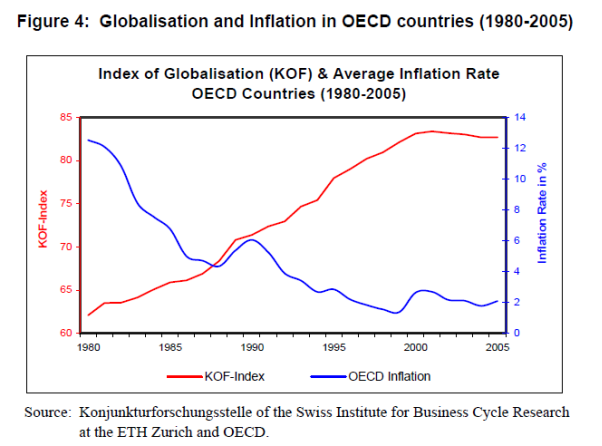 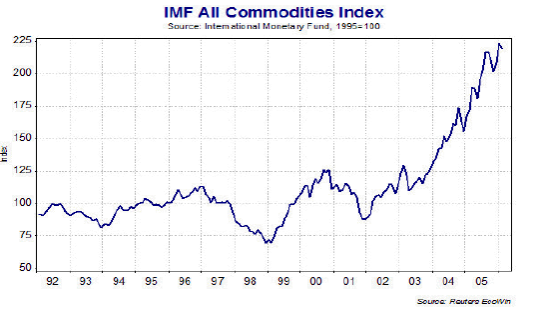 Francesco Bianchi, A. C. (2013). Introdcution. Globalization and Inflation: Structural Evidence from a Time, 1.

Pehnelt, G. (2007). THE EFFECTS OF GLOBALISATION ON INFLATION. Globalisation and Inflation in OECD Countries, 4.