What are Economies of Scale?

The term economies of scale refers to a situation where the cost of producing one unit of a good or service decreases as the volume of production increases.

Classification of Economies of Scale:

Marshall made a differentiating concepts of internal and external economies of scale. That is that when costs of input factors of production go down, it is a positive externality for all the firms in the market place, outside the control of any of the firms. 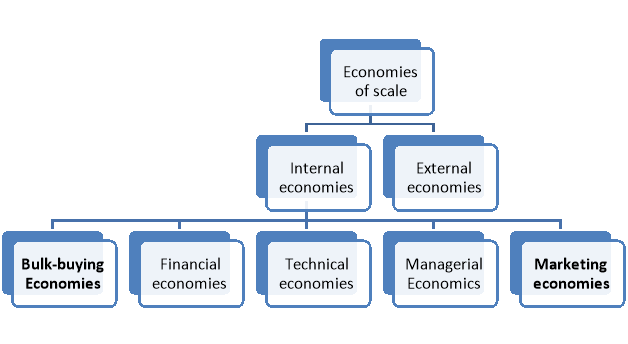 Internal economies of scale relate to the lower unit costs a single firm can obtain by growing in size itself. This means that the internal economies are exclusively available to the expanding firm.

Internal economies of scale may be classified under the following categories.

As businesses grow they need to order larger quantities of production inputs. For example, they will more raw materials. As the order value increases, a business obtains more bargaining power with suppliers. It may be able to obtain discounts and lower prices for the raw materials.

Businesses with large-scale production can use more advanced machinery (or use existing machinery more efficiently). This may include using mass production techniques, which are a more efficient form of production. A larger firm can also afford to invest more in research and development.

Many small businesses find it hard to obtain finance and when they do obtain it, the cost of the finance is often quite high. This is because small businesses are perceived as being riskier than larger businesses that have developed a good track record. Larger firms therefore find it easier to find potential lenders and to raise money at lower interest rates.

Economies in marketing arise from the large –scale purchase of raw materials and other material inputs and large scale selling of the firm’s own product. Every part of marketing has a cost – particularly promotional methods such as advertising and running a sales force. Many of these marketing costs are fixed costs and so as a business gets larger, it is able to spread the cost of marketing over a wider range of products and sales – cutting the average marketing cost per unit.

As a firm grows, there is greater potential for managers to specialise in particular tasks (e.g. marketing, human resource management, finance). Specialist managers are likely to be more efficient as they possess a high level of expertise, experience and qualifications compared to one person in a smaller firm trying to perform all of these roles.

External economies of scale occur when a firm benefits from lower unit costs as a result of the whole industry growing in size. External economies accrue to the expanding firms from advantages arising outside the firm e.g. in the input markets.

The main types are:

As an industry establishes itself and grows in a particular region, it is likely that the government will provide better transport and communication links to improve accessibility to the region. This will lower transport costs for firms in the area as journey times are reduced and also attract more potential customers. For example, an area of Scotland known as Silicon Glen has attracted many high-tech firms and as a result improved air and road links have been built in the region.

Universities and colleges will offer more courses suitable for a career in the industry which has become dominant in a region or nationally. For example, there are many more IT courses at being offered at colleges as the whole IT industry in the UK has developed recently. This means firms can benefit from having a larger pool of appropriately skilled workers to recruit from.

A network of suppliers or support industries may grow in size and/or locate close to the main industry. This means a firm has a greater chance of finding a high quality yet affordable supplier close to their site.

The long run average cost curve (LRAC) is known as the ‘envelope curve’ and is usually drawn on the assumption of their being an infinite number of plant sizes – hence its smooth appearance in the next diagram below.

If LRAC is falling when output is increasing then the firm is experiencing economies of scale. For example a doubling of factor inputs might lead to a more than doubling of output. 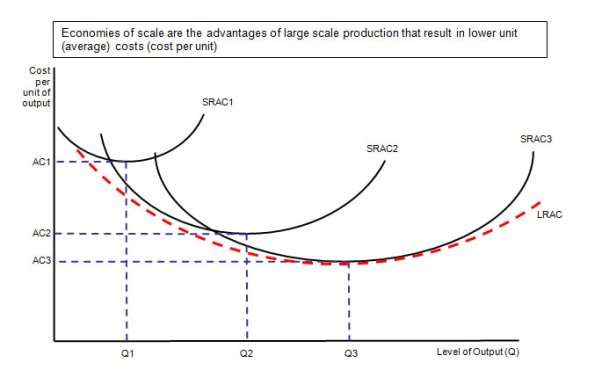 Economies of scope is a term that refers to the reduction of per-unit costs through the production of a wider variety of goods or services.

Many firms produce more than one product. Sometimes, a firm’s products are closely linkes to one another. An automobile company, for instance, produces automobiles and trucks, a chicken farm produces poultry and eggs. At other times, firms produce physically unrelated products. In both caes, however, a firm is likely to enjoy production or cost advantages when it produces two or more products.

These advantages could result from the joint use of inputs or production facilities, joint marketing programs, or possibly the cost savings of a common administration.

Example of Economies of Scope

Under acquisitions one firm buys the assets or shares of another. Acquired company becomes subsidiary of purchasing company.

Management synergy refers that the companies use its extensive and efficient management resources through new permutations and combinations after M&A to improve the existing management and finally increase the revenue.

Operating synergy refers to the improvement of production and operation efficiency of enterprises which caused by economies of scale and economy of scope after M&A.

Financial synergy refers to the financial benefits generated by M&A transaction. It is a net cash flow on benefits which are caused by tax laws, accounting standards and other provisions of the securities and exchange.

Two companies that merge may be able to produce more revenue than either one could produce independently by combining the most efficient processes each brings to the merger.

Risks Analysis of the Realization of Synergistic Effect

The risks of the realization of synergistic effect refers to the uncertainty of the increment of corporation value and the performance of strategic M&A. Such risks always exist throughout the whole process of synergistic effect realization. From the view of the root causes of the risks, such risks can be divided into internal risks and external risks

M&A often requires large amounts of capital, how to raise funds in short term is very important. Companies can use cash, stock or debt financing for the M&A. Either way, there are great risks. If companies use cash to complete the M&A, there will have the following short-comings: first of all, a one-time large amount of cash outflow for M&A will cause intense pressure on the production and management of the enterprise. Second, the trade size will be restricted by the ability to obtain cash and lead to the failure of a large-scale M&A. Moreover, the merged side may not like cash payment, because they cannot get the new company’s equity, this situation will also lead to M&A risks.

According to a survey on the failure of M&A, about 80% of M&A failures are caused by enterprise integration failures. The M&A integration risk is manifested mainly in the following three aspects: first, production and technology cannot achieve the expected synergy after M&A. For example, the M&A side usually wants to implement diversification through M&A so as to enter new areas, when the growth of the new areas are faced with obstacles, it often makes M&A activities in trouble. Second, the integration of personnel, institution and culture after M&A. If the enterprise cannot make effective integration according to the designed M&A plan, this will lead to the conflict of personnel, institution and cultural be-tween new and old enterprises and resulting in internal friction. Third, the impact of M&A on business relationships, such as the impact on customers and suppliers. M&A might cause deterioration in external business relationship and lose some customers and suppliers, thus lead to the increase of enterprise’s operating costs and reduction its profitability.

Under normal circumstances, the merged enterprise’s attitude of M&A is uncooperative. Because the merged enterprises are usually inferior enterprises, they will find ways to stop M&A. Such practices will greatly increase the M&A risks. In addition, under the modern corporate governance structure, a successful M&A must first be accepted by enterprise management, then adopted by the board of directors in the enterprise, at last obtain the consent of the large, small and medium-sized investors.

For pursuing business expansion, the senior executives with information superiority might ignore the interests of shareholders to meet the needs of their individual fame and fortune. The “out of control” risk of principal-agent relationship in M&A decision is very dangerous. In a company, the relationship between its manager and corporate owners is principal-agent relationship. The company management might pursuit company expansion for their own interests to show their performance. They have information superiority and might agree on the unreasonable terms of the target company without considering its own financial and operating conditions. This conduct will increase the realization cost of synergy and reduced synergy benefits.

In the market mechanism of incomplete competition, the problem of information asymmetry is quite general. During the course of strong company’s acquisition of target company, the target company’s executives might conceal the facts such as enterprise’s hidden losses of contingent liability and the true value of patents to achieve their private intentions. They might also collude with the agency or the insider of the strong enterprise to make false information so that the policy makers of the merging side might make wrong decisions.

Policy risk refers to the synergy risk which caused by the adjustment of national economic policies. The government develops special policies to protect the vested interests of government and “special groups” or uses administrative means to arbitrarily change its policy to destroy the normal order of market competition, such behavior would increase the risk of synergy.

Legal risk mainly lies in the following three aspects. The first is the provisions of anti-monopoly law. Most of western countries developed a series of anti-monopoly laws to safeguard fair competition. The second is the specific provisions of M&A in the law. For instance, according to the correlated laws, if the acquirer holds 5% of a listed company’s shares, it must notice and suspend trading, for each 2% subsequent increment, it is necessary to repeat the process, if holding 30% of the shares, it must launch a comprehensive tender offer. This provision leads to great increase of the acquisition costs and M&A risk. Thirdly, during the course of M&A, as laws and regulations are incomplete, the conduct of company cannot be guided correctly, thus result in the increase of M&A risk.

Industry risk refers to the uncertainty of the industry prospects caused by the changes of country’s economic situation and industrial policy, which might influence the enterprise development strategy. In the process of M&A decision-making, many enterprises sink into woeful situation because they are not familiar with the new industry they wish to enter or without a accurate grasp of the industry prospects. The “big diving” of e-commerce enterprises in the last two years are good examples.