To have a better understanding of 2008-2009 financial crisis we need to know where does it start and why it become global issue. The main reason for this financial meltdown of the economy was the Collateral debt obligation and rating agencies who rate them.

CDO is acronym for Collateralized debt obligation. Longstaff and Arvind (2008) describe CDO as: “financial claim to the cash flows generated by a portfolio of debt securities or, equivalently, a basket of credit default swaps (CD contracts)”. To find out the main reason for this crisis, it is important to know how these CDOs work. 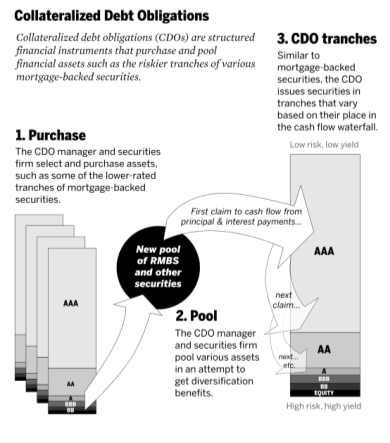 Figure 1 shows how the CDOs works from Final Report of the National Commission on the Causes of the Financial and Economic Crisis in the United States, p.128, figure 8.1

Banks combine loan such as Mortgage Backed Security (MBS) and Mortgages, with different risk combinations from AAA to BB. Financial engineers gathered these CDOs in a pool to make incentives for potential investors to purchase them with lower risk. McLean, Bethany and Nocera (2010) mentioned that CDOs contain variety of loans in early 2000. But with boom in hosing mortgages, a big tranches of CDOs become sub-prime mortgages with risk level of A or BBB. But rating agencies still rate CDOs as high rating investments (Barnett-Hart 2009 sited by Lewis 2010). This financial innovation allow investors all around world to invest in US housing industry, therefore when housing bubble collapse due to sup-prime mortgages, investors face an catastrophes loss.

The question here is why it became so easy for banks to start CDOs? Usually investors with huge amount of money buy treasury bills of US which are the safest investment with AAA ranking, but after dotcom bubble, US Federal Reserve chairman, Alan Greenspan, lowered interest rate of treasury bills to 1% to stimulate economy of US and keep it strong. On the other side of this decision, borrowing money for banks became very easy with very low interest rate; moreover the surpluses from other countries such as Middle East and China comes in the US market and make borrowing super cheap for the banks. Surplus money persuades bankers to use leverage in their loans. The investors became interested to this market and banks bring new financial innovation to connect the investors to the home owners through CDOs, and sell CDOs to the investors.

Banks give mortgage loans to people with low interest rate and low risk, when the market for secure borrowers was saturated, banks start to deregulate the market and give loans without need of formal grantee to repay. These kinds of loans are called liars loans!

Liar’s loan is a loan that is given to individuals without any guarantee of getting back the loan and very low or no down payment. This kind of loans banned in us because of the fraud and damage to the financial industry. But authorities of banking in us could implement these laws over banks that they have jurisdiction over it which is saving. But in some cases such Long Beach Savings voluntarily gave up federal deposit insurance and federal saving and loan charter. Later it changes its name to Ameriquest and become a mortgage banker who starts to give liars loan to individuals. Banks also inflate the price of mortgages and start to give loans which exceed the house price to make more money.

In this time the financial institution around the world becomes interrelated. When one of the mortgages defaults on payment the bank takes over the house and sells it to get beck their money. But banks issued so many risky loans and so many of them defaults on payment. It means more houses for sale. This action increase supply of houses with decreasing in demand. Therefore the price of the houses dropped and went lower the value of the house which already overvalued by the banks.

In that time, financial institutions face major liquidity shortage. Liquidity is necessary to meet the short term obligation. Therefore, there were a huge shortage in buying and selling and make their payment around the world. Some analysts argue that picking oil price at $147 in summer 2008 and falling again is due to liquidity shortage. The problem was most of the global contracts had been done some months before the fall of the financial systems with arrangements such as Letter of Credit (LC) and after the crisis, banks were not able to meet their liabilities. And it happened for all the financial institutions around the world.

Same sequence happened around the world, especially between banks in Wall St and London whit their competition to become financial center of the world. Crisis starts in UK with failing of Northern Rock Building Society in 2007 which ends with nationalization of Northern Rock. And it continues with bankruptcy of Lehman Brothers in 2008 because the US authorities refuse to bailout the bank and it move on with bankruptcy of AGI the largest insurance company in the world. Just three weeks after Bankruptcy of Lehman Brothers. Public panic after the news came out about Northern Rock makes the situation exaggerated. People rush to the bank and try to tacking back their deposits and it makes liquidity problem worse.

The crisis also effectively increase the interbank rate due to lack of trust but the central bank interest rates remained low. It became very difficult to obtain any loan from banks and it freezes the economy for a long time. It shows its effect in manufacturing and retail industry because they were unable to gain their liquidity by debt from banks.

Situation force the Bank of England to provide financial aids for Northern Rock Building Society and later in Feb 2008 Bank of England formally nationalise it. Also in the same time in US, early 2008, J.P. Morgan rescued Bear Steams (one of the major investment banks) with support of US government. The crisis gets worse in summer 2008 on 7th Sep, Fannie Mae and Freddie Mac (mortgage financers) rescued by government. On Sep 15th 2008 Lehman Brothers went bankrupt with $600 billion liabilities. UK government nationalised Bradford and Bingley Building Society in 2008 and later sold to Spanish Grupo Santander Bank. Again, in 2008, Royal Bank of Scotland was nationalized by UK government, first government buy 58% of share and later increase it to 84%.

UK government forced HBOS (the largest mortgage lender in UK) to join Lloyds TSB group to avoid trouble. Barclays and HSBC avoid nationalisation but they were forced to issue new shares to increase their capital ratio. UK actions became a sample for other countries in Europe such as Germany, Belgium, Spain, and Ireland to save their non-liquid and under capitalized banks.

In conclusion, all of this happened because investment bankers try to act like mortgage banks and vice versa, mortgage banks try to act like investment banks. This financial crisis was avoidable, because of its sign such as inflating the price of the mortgages and liars loan which should be seen by regulators and central banks. But due to a race to the bottom of financial market, nobody were bothering themselves with regulating the market and crisis happened.

Crisis Inquiry report (2011), Final report pf the national commission on the causes of the financial and economic crisis in the united states. Submitted by Pursuant to Public Law 111-21

McLean, Bethany and Joe Nocera, All the Devils Are Here, the Hidden History of the Financial Crisis, Portfolio, Penguin, 2010, p.120

Final Report of the National Commission on the Causes of the Financial and Economic Crisis in the United States, aka The Financial Crisis Inquiry Report, p.127

Anna Katherine Barnett-Hart The Story of the CDO Market Meltdown: An Empirical Analysis-March 2009-Cited by Michael Lewis in The Big Short (2010) , Barnes and Noble