Normally economic growth of a country is measured by Gross Domestic Product (GDP) in one year. GDP is the total amount of final goods and services produced in one year within the country. When we consider Sri Lanka GDP, it is as follows. 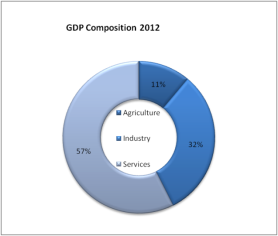 In 2012 DGP growth rate was 6.35%. In 2013 it showed a 7.2 % GDP growth. In the first quarter of 2014 there was a 7.6% of growth rate according to the Department of Census and Statistics. By these values we can see there is increment of growth rate by one digit when it comes to 2013 from 2012. But this increment is no sufficient to get the required income level. As well as it seems, that Sri Lanka is not going to achieve her target of being the “Economic Miracle of Asia” within next few years.

A main reason of this failure is lack of technology. Sri Lanka has to invest on technological inventions and productions much more than now. Sri Lanka has more natural resources as well as human capital to gain such a high technology. Currently what happens, most of natural resources are exported and import the finished goods made using that resources. And since there are no suitable occupations for the skilled, mindful people they try to go for foreign jobs or satisfy with a low quality job. Since of this brain drain, Sri Lanka falls more down. By exporting natural goods such as graphite, ore iron and importing finished goods of them make a huge loss to the country. We find foreign exchange by exporting them, but we need more than that income to import the finished goods of them. If we can invest money for new technologies and production ways we can save that money within our country and get a good income by exporting the finished goods. We know the developed countries such as USA, UK even Japan has no much of natural resources. They import those resources and using their technologies manufacture products with high qualities and export them for high values. This is the time for Sri Lanka to increase the power of technology to become the “Economic Miracle of Asia”.

Another important factor is most of people tend to get imported goods because they are low price than the locals. By this tendency our money easily goes to other countries. In the past Sri Lanka was self-sufficient with foods since the high agriculture. But now most of foods items such as onion, dhal, sugar even sometimes rice are imported instead of planting them. Because of these reasons we loss lot of our money.

We can see some huge manufacturing plants in Sri Lanka. But we should be careful to check whether they actually give a high profit to us, because they may be only established on our land and may give the profit to another country. As an example there was a glass company owned to Sri Lanka, Ceylon Glass Company and now it is converted to Piramal Glass owned by an Indian company. So a high portion of profit goes to that company. If it is owned by Sri Lanka it will give the full profit us.

Currently Sri Lankan main exporting income is produced by migrant workers. Over 250 000 migrant workers have been employed overseas, most of them are housemaids. They supported to GDP in 2012 by 10%. In US dollars it is 6.1 billion. Apart from that now the only product which Sri Lanka is famous for, is cinnamon. But from exporting cinnamon it can achieve only an annual income around 100 million of US dollars. Then it comes to apparel, tea, diamonds, gem and jewelries. But these are not sufficient to achieve the aim of US dollars 18 billion exports by 2016. So to be the “Economic Miracle of Asia”, Sri Lanka has to differentiate its exporting items using new technologies as mentioned above.

Lack of entrepreneurs is another constraint of being the “Economic Miracle of Asia”. Entrepreneurs should have the ability to take a risk of their own money and time to start and operate a business with the belief of that their business idea will make a profit. For that they should have a basic idea about the real economic level of country and the real direction country going on. Without knowing that, people cannot help for the country with their best. Currently we can see many politicians try to protect their power and do not recover the truth of the economy of the country and do not say the real duty of people have to do on behalf of our country. So without a better guidance people don’t like to become entrepreneurs and as well as they do not compel to contribute their maximum for the betterment of the country. As an example we all know in the government sector most of people do their works in a lazy manner. In the final hour of the working time they do almost nothing profitable. Till stopping this time wasting and giving a true feeling about the country to the hearts of its people we cannot make this country as the “Economic Miracle of Asia”. In Singapore even a taxi driver knows the current direction of their country going on and their targets. So they contribute hardly to the development of their country. In Sri Lanka we can’t see such situation. So lack of the feelings and lack of awareness of the direction of the country going on is a major constraint to Sri Lanka of being the “Economic Miracle of Asia” within next few years.

Tourism is another source of income in Sri Lanka. The government is more targeting on this side and getting profits. But some people bother the tourists and try to earn some money from them. So the prestige of our country faces a problem. It can lead for the reduction of income due to tourism. Then it will cause to the reduction of economic of the country.

The population of a country can cause its economic level.

When considering Sri Lankan population we can see a gradual growth up to January 2012 and suddenly it is decreased when it comes to January 2013. We cannot say a high population gives more income to the country; it depends on the GDP level. But on the other hand low population gives a low contribution to the labour force of the country. As well as current young generation tends work in an air conditioned area. They will work in a shop even for a lower payment. They do not like to work hard. This is a bad situation for the industries which have a good willing to contribute to the development of the country. A main reason for that is, most of them are suffering from lack of technological education. So the government has a responsibility to upgrade skills of the work force, by that building a productive and competitive work force, capable of working with the changing dynamics of the world economy. Then they can really work for the country with their maximum.

Those are the Sri Lanka’s main constraints to be an “Economic Miracle of Asia” within next few years:

Sri Lanka cannot achieve its target of being the economic miracle of asia within the next few years. Lack of usnig technology, people’s low attitude about the country and lack of their awareness bout the real economic situation of the country, less entrepreneurships, less no of exporting items, importing most of goods, less nvesting on the industrial productions are the main constraints.