The following analysis attempts to assess the structure and sources of competitive pressure in the British Phonographic Industry using Porters five forces framework model, and how the advent of the internet has affected the structure and performance of the industry.

Michael Porter’s Five-Forces framework model recognises the economic forces that affect industry profits. The five forces are: Internal rivalry, Entry, Substitutes and complements, Supplier power and Buyer power. These forces may affect and abolish the revenues of current businesses. The five forces framework is a business study and industry strategy improvement instrument which lets marketers eventually generate stakeholder value through industry events. The key factors of appeal are the demand and supply of products in the market, quantity of entrants presently in the market and their strengths and weaknesses. In response to the essay question, the British Phonographic Industry will be examined critically through each of the five forces. A graphical representation of Porter’s Framework is shown below: 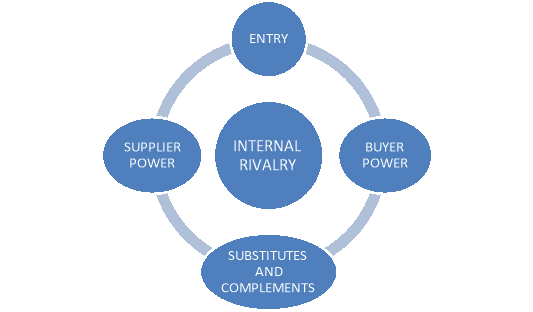 “BPI (British Phonographic Industry) represents the UK’s recorded music industry, which is one of the most exciting and thriving music sectors in the world. British artists account for one in eight albums purchased by fans around the globe” (http://www.bpi.co.uk/about-bpi.aspx). BPI co-owns the Official Charts Company in “a joint venture with the Entertainment Retails Association (ERA). The Official Charts Company is responsible for the commissioning, distribution, marketing and promotion of the UK’s industry standard music and video charts and sales data. BPI also maintains the industry standard for certifying Gold, Silver and Platinum sales awards” (http://www.bpi.co.uk/about-bpi.aspx). There are three major record companies within the British Phonographic Industry which are: Warner Music UK, Sony Music Entertainment UK and Universal Music UK.

Internal Rivalry refers to the jockeying for shares by firms within a market. It is fierce if competition drives prices towards costs. This is more likely when there are many firms, products are perceived to be homogeneous, consumers are motivated and able to shop around, prices may be set secretly, sales orders are large and received infrequently and the industry has excess capacity. The UK music business has been contested for by three big recording studios for years. There is severe rivalry amongst these recording studios; their market shares continued to be steady for years as new opposition hardly went into the market due to great entry barriers. The music industry is booming when associating online and offline sales collectively.

The product distinction attainable in the music business is very low due to all types of music being approximately the same. The diversity could be attained through the setups of music delivered such as CD’s and online formats such as MP3’s. Downloading is now becoming more common than the constant visits to the music stores, the music business has unremittingly decreased the amount of stores and fixated on emerging an online approach. Through doing this they have been successful at reducing high fixed costs including store rentals and incomes of a high number of store employees which has assisted with their margins.

The selection of a gifted artist and turning them into a success involves skilled use of advertising, talent supervision and investment. Recognised music labels devote a lot to undertaking appearance improvement campaigns, and experiment with advertising before the artist’s work is free for the public to see. These particular parts require professional abilities and involve having money.

Substitutes wear down profits in the same way as competitors entering the market by stealing business and increasing internal rivalry. Complements boost the demand for the product in question; thereby improving profit chances for the industry. In the music business, the alternatives for music purchases or downloads can be recognised to be plagiarised music downloads online and Radio stations that play music 24 hours. Plagiarised music websites which offer music for free are the distinguishable alternatives for the music industry. The consumer having a choice of whether or not to buy music or to download it continues to be a fight in their mind. So the risk of this alternative is very high.

Music such as those on Jango or Napster allows consumers to listen to songs an unrestricted number of times without the need to purchase them. While they don’t obtain the luxury of downloading music for free and listening to the songs on the move, it can still be seen as an alternative as it permits for the entertainment of consumers. When it comes to TV and Radio music stations, the necessities for setting up those services such as TV set boxes and regular subscriptions are fairly costly in comparison to the price of an album. But with other facilities such as the ability to record channels and the choice of other stations on offer, they may have chosen the better option when compared to a music album.

If a firms suppliers “have bargaining power they will exercise that power, sell their products at a higher price and squeeze industry profits” (http://www.tutor2u.net/business/strategy/porter_five_forces.htm). If the supplier drives up the price paid for inputs, revenues will be condensed. Suppliers find themselves in an influential position when there are only a few suppliers, the resource they supply is scarce, there are no or few substitute resources, the product is easy to differentiate and faithful consumers are unwilling to switch. The bargaining powers of performers are high as it is believed that the voice and skill of each performer is distinctive and cannot be replaced.

Buyer power is analogous to supplier power. “It refers to the ability of individual customers to negotiate purchase prices that extract profits from sellers” (Economics of strategy 6th edition, David Besanko). “Buyers have indirect power in competitive markets, and the price they pay will depend on the forces of supply and demand. The willingness of consumers to shop for the best price could instead be considered a source of internal rivalry, not indirect buyer power. When buyers are focused, or suppliers have made relationship-specific investments, buyers may exert direct power” (Economics of strategy 6th edition, David Besanko). Buyers then demand lower prices when suppliers are thriving and accepting higher prices when suppliers are struggling.

The consumers for the UK music business can be either individual or corporate. Corporate consumers in the music business contain online and offline traders who buy albums in large quantities from the music label. Stores included could be HMV and Game and online music stores which include stores such as iTunes and AmazonMP3. The negotiating power of the corporate consumers can be assumed to be low due to prices being settled amongst them and the labels at the time of signing the contract.

Advent of the Internet

I will now analyse how the advent of the internet has affected the structure and performance of the music industry.

The Internet is “a global computer network providing a variety of information and communication facilities, consisting of interconnected networks using standardized communication protocols” (http://www.oxforddictionaries.com/definition/english/Internet). The structural attractiveness of the UK music industry is determined by five underlying forces of competition. These include: The intensity of rivalry among existing competitors, the barriers to entry for new competitors, the threat of substitute products or service, the bargaining power of suppliers, and the bargaining power of the buyers. Below are points under each of the forces on how the internet influences the music industry which are taken from Michael. E Porter’s Competitive strategy free press, 1980.

The Internet has enlarged the amount of competitors in the music industry and decreased the significance of geographic boundaries. “There is increased rivalry because companies have a stake to succeed with use of the Internet. Rivalry increases when there is less differentiation between products. There is highly intense competition due to the Internet becoming an online platform for commercial use” (www.studybay.net).

Barriers to entry for new competitors

The internet has decreased the fixed costs needed for a business to get to their end users. Most record labels find it easier to launch online ventures since they are positive about brand loyalty and trust.

Threat of substitute products or services

The internet has assisted in increasing the pressure from alternative products, as it may increase the diversity of products available to consumers. This can be done by customers being able to now purchase CD’s online or download songs for free.

Bargaining power of the suppliers

“The internet offers a channel for suppliers to reach end users, decreasing the power of intervening companies” (Michael. E Porter’s Competitive strategy free press, 1980). Procurement and digital markets tend to give companies equal access to suppliers and to standardised products that decrease variation.

“Moves bargaining power to end customers” (Michael. E Porter’s Competitive strategy free press, 1980). The customers have the bargaining power as they have the choice to either purchase CD’s from a store or download the songs for free online.

From the analysis above, it is assumed that the UK music business is booming. The music industry is conquered by three big companies who have been around for a number of years and who operate great shares of the market. Applying Porters five forces framework is tremendously significant in industry analysis as it allows businesses to understand the overall attractiveness of the industry itself. However, one could say that the advent of the internet has affected the sales of CD’s. The need to purchase a CD with one song on it is no longer a necessity as you can just download the song from the internet. “Music piracy online is quite widespread, which affects artists and record labels profits. Anybody that has an internet connection can find illegal music downloads anywhere. Unsurprisingly the labels lose more money than the artists since the label keeps the majority of the money and the artist only sees a small percentage. It is now easier for artists to self-promote and self -release nowadays with all the opportunities for advertising and promoting online. Therefore, it could be said that the advent of the internet has decreased the music industry’s performance.